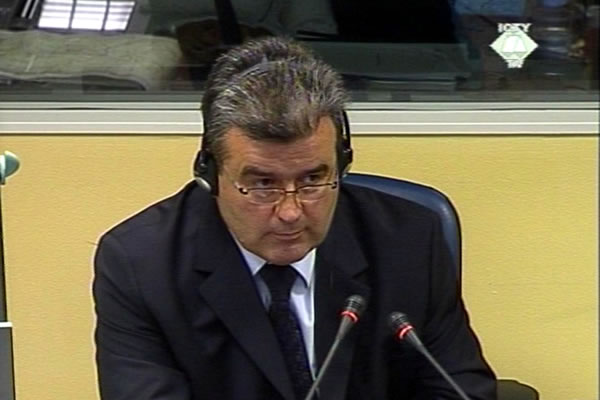 Describing the discipline level in the BH Army in June 1993 when general Delic took over as the commander of the BH Army General Staff, Karavelic said that the civilian authorities interfering in military matters impaired the chain of command, already weakened by the presence of individuals with criminal past, such as Musan Topalovic Caco and Ramiz Delalic Celo. Topalovic and Delalic were brigade commanders in the 1st Corps.

In Karavelic’s words, BH president Alija Izetbegovic contributed to this state of affairs when he approved financial incentives for the disobedient commanders although this weakened the morale of the troops in the BH Army. In 1993, Karavelic confronted the Sarajevo war commander because he had rewarded Topalovic and Delalic. ’Instead of taking my side, Izetbegovic ordered me to make peace with the commander’, Karavelic said, thus corroborating the defense argument that Izetbegovic had ’direct control over some units’ that were not a part of the chain of command. Karavelic contended Izetbegovic interfered because of his ’ignorance of military matters’. When judge Moloto asked him if one could say that Izetbegovic undermined the BH Army war effort, Karavelic agreed with him.

The defense showed the witness a video recording of general Delic’s address to the BH Army officers. In it, the commander of the General Staff says that some commanders exhibited ‘suspect moral and patriotic views’. Karavelic explained that finding a solution for this problem’ was a burning issue the BH Army was facing, adding that the recording was most likely made in the second half of 1993.

This was general Karavelic’s fifth appearance before the Tribunal in The Hague. He testified for the defense in the Enver Hadzihasanovic and Amir Kubura case, and for the prosecution at the trial of Stanislav Galic and Dragomir Milosevic. He also testified at the trial of Sefer Halilovic, the first commander of the BH Army, following a subpoena.