Mladen Kulic decided to forgo the protective measures under which he testified at the trial of Slobodan Milosevic. Now, at the trial of Vojislav Seselj, leader of the Serbian Radical Party, Kulic testified in open session about the events in Western Slavonia in 1991 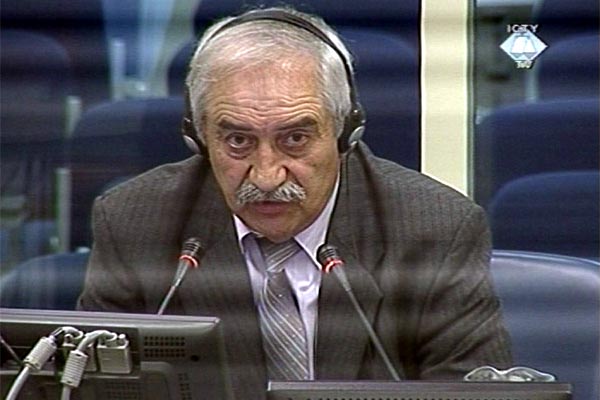 Mladen Kulic, witness in the Seselj trial
In October 2002, Mladen Kulic testified at the trial of Slobodan Milosevic as witness C-60, with image distortion. He talked about the events in Western Slavonia, particularly about the crime against Croatian civilians in the village of Vocin. As the local Territorial Defense, the Serbian Radical Party volunteers and Serbian civilians withdrew from the village, some forty Croatian villagers were killed. The indictment alleges that the only survivors were those Croats who managed to hide from the local territorial defense group and Seselj’s men.

The prosecution intended to call Kulic to testify about these same events at the trial of Serbian Radicals’ leader Vojislav Seselj, also as protected witness. Following his arrival in The Hague, Kulic decided to forgo protective measures, saying that ‘the circumstances have changed’. As the accused insisted on further clarification, Kulic said that the atmosphere in both Croatia and Serbia was different now than it was in 2002. His family has now agreed that he can give evidence without protective measures. Seselj asked Kulic if he thought of him as a threat. ‘Not you personally, but of some of your party members, yes’, Kulic replied.

Before the war, Kulic held various posts in Podravska Slatina. For a while, he was the manager of the Univerzal metal processing plant. In May 1991, he suffered the same fate as so many other Serbs working in the local authorities: he was fired from his post as the manager of the Institute for Social Planning and Statistics. In late August 1991, he left Podravska Slatina and went to Vocin where he was drafted into the local Serb Territorial Defense.

Through his evidence the prosecutor tendered into evidence a number of documents in which the Territorial Defense asks the Ministry for Serbs outside Serbia to dispatch volunteers to Novska, Okucani and other locations in Western Slavonia. A memo of the Serbian Radical Party war staff in Belgrade was also tendered into evidence. The memo states the conditions under which the SRS would dispatch its volunteers to Western Slavonia.

Kulic described the Seselj’s visit to the village of Vocin in November 1991 and the conduct of the SRS volunteers. Both Croatian and Serbian villagers were afraid of them. Kulic left Vocin on 8 December 1991, but heard of the massacre that happened five days later. He testified about it on the basis of what he heard later from eye-witnesses of the killing of some forty Croatian villagers. As far as he knew, two masked villagers lead the killers. They were showing the volunteers the Croatian houses.

In 1995, Kulic was arrested in Croatia and was brought before the court in Bjelovar. He was charged with the Vocin massacre. He was acquitted because of lack of evidence. At the beginning of his cross-examination, the accused Seselj insisted on this fact claiming that Kulic defended himself by shifting the blame on others. Seselj accused Kulic of being a member of the Territorial Defense unit from Vocin that massacred twenty Croatian civilians in the village of Cetekovci in September 1991. According to Seselj, this crime was committed before the arrival of the first volunteers from Serbia to Western Slavonia. Later, when the volunteers came, ‘it was a standard procedure for this criminal group from Vocin’, Seselj said, to blame the volunteers from Serbia for their crimes.

‘Nobody accused volunteers for no reason’, Kulic replied. Kulic will continue his evidence tomorrow.