Following the evidence last week of a protected witness who jumped off the truck moving captives from Ovcara to the execution site in Grabovo, another survivor from the Vukovar hospital testifies at the trial of Vojislav Seselj 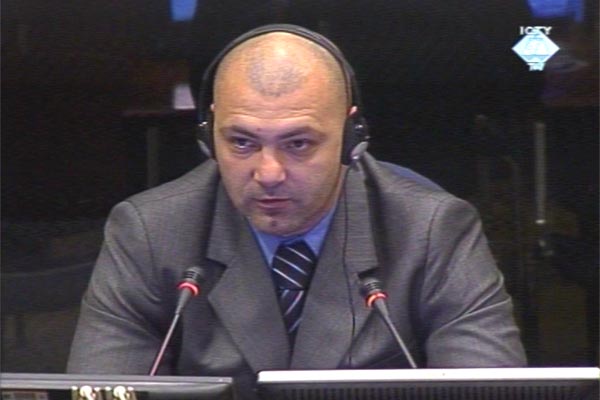 Vilim Karlovic, witness in the Vojislav Seselj trial
Vilim Karlovic, former member of the Croatian National Guard, testifies before the Tribunal for the fourth time describing his calvary in Vukovar in November 1991. Before he took the stand today at the trial of Vojislav Seselj, Karlovic testified as a prosecution witness at the trial of Slavko Dokmanovic, former president of the Vukovar municipality. He gave evidence twice at the trial of three former JNA officers, Mrksic, Sljivancanin and Radic. Today he explained why at the trial of persons who had actually killed about 200 Croatian captives in Ovcara he had testified in the defense of the two Serbian volunteers who saved his life on 21 November 19991.

By mid-November 1991, the joint forces of the JNA, local Territorial Defense and volunteer units from Serbia entered Vukovar. Karlovic took shelter in the Vukovar hospital, believing he would be safe there. However, in the morning of 20 November 1991 he was taken out of the hospital together with some three hundred other Croatian soldiers and wounded. They were put on buses and taken to the JNA barracks. Most of the captives were then taken to the hangar at the Ovcara farm. The captives had to run the gauntlet of some 150 persons who punched them, kicked them and hit them with rifle butts and bars, he said, before they entered the hangar. According to Karlovic, Chetniks led the way in the abuse of the prisoners, but the JNA soldiers and ’territorials’ joined in.

While he was waiting to enter the hangar, the witness struck up a conversation with a JNA soldier who said his name was ’Stuka’. It turned out they shared some acquaintances and the witness asked him if he could help him in any way. ’Stuka’ resisted at first, but them took Karlovic out of hangar with the help of a JNA captain. ’Stuka’s full name is Spasoje Petkovic. At the Ovcara trial before the War Crimes Chamber in Belgrade, Petkovic was given the status of a ‘witness-collaborator’.

Karlovic was taken from Ovcara to a company called Modateks where he spent the night. In the morning of 21 November 1991, he was transferred to Velepromet where he and twenty other Croats were detained in a building called ’Stolarija’. On that day, he recalled, the ‘Chetniks’ took out two middle-aged men and a boy aged 12-13 and killed them. Karlovic didn’t say what unit the volunteers he called ’Chetniks’ belonged. He described them as soldiers with traditional Serbian caps, fur hats and Chetnik insignia. He believed they had been recruited by the Serbian Radical Party.

According to the witness, in the evening of 21 November 1991, three ’Chetniks’ took him out of Velepromet to a house in Petrova Gora, a neighborhood in Vukovar. Twenty Chetniks welcomed him ‘with enthusiasm’, as he said. They immediately beat him up, burning him with candles. Volunteers nicknamed ’Belgija’ and ’Ceda’ were the ringleaders. A man by the name of Miljan, or Smiljan, broke a bottle on his head and then used it to cut his body. Throughout that time, there was a woman in the house. She was urging the ’Chetniks’ to rape him. Karlovic is not sure if her name was Daca or Jaca. At a certain point, Predrag Milojevic ’Kinez’ and Marko Ljuboja ’Mare’ entered the house ordering the ‘Chetniks’ to stop the abuse and after a short quarrel they managed to take Karlovic with them. The War Crimes Chamber in Belgrade sentenced Milojevic to 20 years for his part in the killing of some 200 Croats in Ovcara, while Ljuboja was acquitted. Karlovic, who was a key witness in their defense, said today he was sorry they had not both been acquitted.

After some time, the witness was taken back to Velepromet and on 22 November 1991 he was taken to a prison in Sremska Mitrovica in Vojvodina. A JNA officer took him out from Velepromet. When the officer saw how badly beaten and cut Karlovic was, he said angrily, ‘We have been fighting the Ustashe, but now we will have to fight Chetniks’. After six months in prison, Karlovic was exchanged and was able to go back to Croatia.

In the statement he gave to the OTP investigators last week, Karlovic added another detail to his earlier testimony. He believed that the Serbian forces entering Vukovar called for surrender over the loudhailer, playing the prerecorded message of Vojislav Seselj. The accused objected to that but the presiding judge clarified that this was the ‘best example’ of a topic he should explore tomorrow in his cross-examination.