The prosecution military expert confirms that there were no military attacks against civilians in Vojvodina in 1992. Seselj is now sure that the part of the indictment charging him with deportation and forcible transfer of Croats from the village of Hrtkovci in Vojvodina will thus have to be dropped 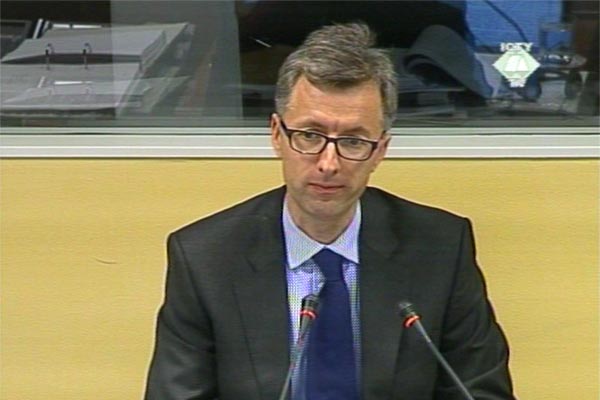 Reynaud Theunens, witness in the Seselj trial
In the previous three days of his cross-examination, the accused Vojislav Seselj strenuously contested the impartiality of the prosecution military expert Reynaud Theunens and made disparaging comments about his competence. Today, however, Seselj commended him as ‘his best witness’ promising him that he would give him a job on his defense team, if Theunens were to lose his job because of this compliment.

The about-face followed after the prosecution military expert confirmed the argument of the accused that there were no military attacks against civilians in Vojvodina in 1992. Seselj obviously believes he has now dealt with the charges of deportation and forcible transfer of Croats from the village Hrtkovci in Vojvodina. This has been qualified as a crime against humanity in the indictment. ‘If there were no attacks,’ Seselj noted after Theunens’ confirmation, ‘then this part of the indictment falls’.

Since his arrival to The Hague Seselj has been trying to challenge the part of the indictment relating to Vojvodina, using the same argument: that there was no ‘armed conflict’. According to the ICTY Statute, the existence of an armed conflict is a prerequisite for a crime to be qualified as a crime against humanity. At one point in June 2004 it looked as if Seselj would succeed, because the Trial Chamber invited the prosecution to clarify whether there was an armed conflict in Vojvodina and if yes, to provide additional evidence to corroborate the claim.

However, in September 2004 the Appeals Chamber accepted the prosecution argument that the Trial Chamber’s decision used a narrow interpretation of the term ‘armed conflict’, as the existence of ‘fighting’ or ‘violence’ instead of using it as a wider legal concept, ‘a state of armed conflict’ as has been the practice before the Tribunal. In this specific case, the prosecution has to prove that the attack on the civilians in Hrtkovci happened in the context of the armed conflict in Croatia and BH, and establish a link between the attack against civilians in Vojvodina and conflicts in neighboring countries.

In his cross-examination, Seselj noted that the Chetnik rank of vojvoda was bestowed not only on commanders of the SRS volunteers, but to ‘prominent fighters in all battlefields where the Serbian nation fought’. The rank didn’t carry any power: it was just an honorary rank. In re-examination, the prosecutor showed two video clips to contest this claim. The first shows the ceremony where eighteen Chetnik vojvode were promoted to that rank and took their oath and Seselj’s speech on that occasion. The footage was taken on 15 May 1993. In his speech, Seselj announced thousands of Chetniks would cross the Drina river if foreign countries intervened. In the second video, from 1994, British journalist interviews Chetnik vojvoda Slavko Aleksic and his spokesperson, a Serb from New York. The interview was filmed in the Serb-controlled part of Sarajevo. The Chetnik from New York said that Seselj was their ‘political leader and a great guy’ adding that, in his view, Slobodan Milosevic was ‘also a Chetnik, despite the fact that some people see him as a communist’.

The videos confirm that when Seselj promoted Chetnik vojvode he confirmed ‘their authority and prestige among the volunteers’, Theunens contended.