Defense witness Haso Ribo continued his evidence today, claiming that the El Mujahid Detachment members decided when to join in BH Army operations. In his words, as of 1 April 1995 the detachment was subordinated to the 35th Division and ‘no one else’ 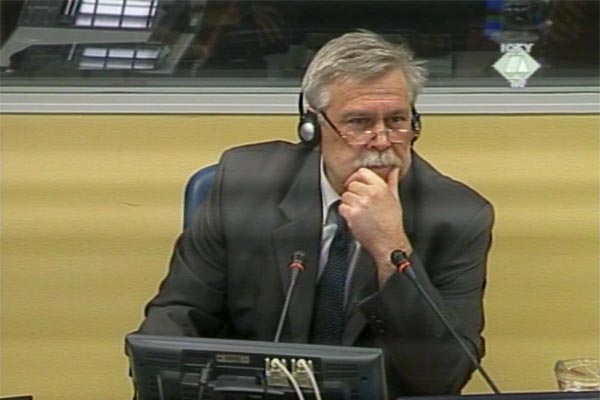 Haso Ribo, defense witness for Rasim Delic
The El Mujahid Detachment members took part in BH Army combat operations only when they decided they were ready to fight, Haso Ribo said, as his examination-in chief continued. If they didn’t want to participate, there was nobody who could order them to execute a combat mission, he said. Ribo was a former commander of the Territorial Defense in Travnik.

According to the witness, the El Mujahid Detachment officers moved into the school building in Mehuric in late July 1993 with the permission of Zihnija Aganovic and Adil Loza, from the civilian authorities in Travnik. Territorial Defense members could not influence the decision-making in the civilians’ authorities at the time.

After the Territorial Defense was transformed into the BH Army, in late 1993 Ribo was appointed chief of the Operations Department in the 3rd Corps. In late August 1994, Ribo was ordered by the Corps command to visit the positions held by the 7th Muslim Brigade and the El Mujahid Detachment. He was unable to complete his task as the Mujahideen didn’t allow him to visit their position. According to Ribo, this was his first direct encounter with the foreign Arab fighters.

In its effort to put the Mujahideen under its control, on 1 April 1995 the 3rd Corps command subordinated the El Mujahid Detachment to the 35th Division, commanded by Fadil Hasanagic. From then until the end of the war, Ribo concluded, the detachment was subordinated to the 35th division and ‘no one else’.

According to the witness, the Vozuca operations in June and July 1995 were planned by the command of the 35th Division. The 3rd Corps was at that time focused on ending the siege of Sarajevo and only joined the planning of the Vozuca operations in September 1995 when Operation Farz was launched. All combat activities of the El Mujahid Detachment in those operations were under the sole command of the 35th Division, Ribo clarified.

The witness claims he had no knowledge of about 60 Serbian soldiers captured in September 1995 on Mount Ozren. Through this witness, the defense wanted to contest the authenticity of an operations diary where the arrest of a group of Serbian soldiers is recorded. According to the witness, some pages are missing from the diary and others were inserted later. Nobody read those logs, he went on to explain, because they were kept ‘more as a historical record’ than for any real purpose, Ribo said.

The first witness called by Delic’s defense will be cross-examined by the prosecutor tomorrow.