WAR WITH NO PRISONERS OF WAR

The prosecution argues that the army and the police killed KLA prisoners on the spot. The witness testifying in the defense of police general Sreten Lukic, however, says there were no prisoners because the terrorists carried away their wounded and dead fellow fighters. ‘What happened in Racak then?’ asked the prosecutor 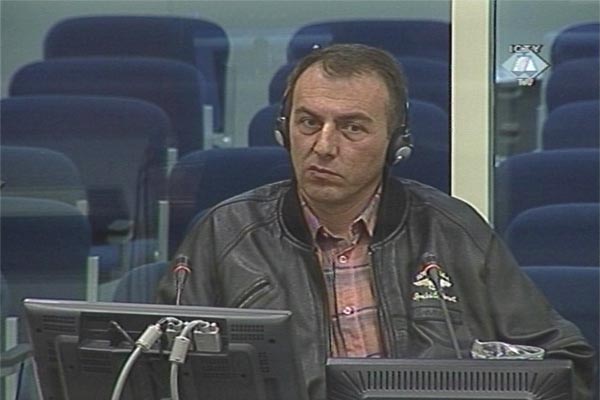 Radojica Nikcevic, defense witness for Sreten Lukic
Most prosecution witnesses said that the crimes against Kosovo Albanians in 1999 were committed by soldiers and police officers wearing a number of different uniforms. The defense of police general Sreten Lukic is now trying to prove that the police officers were dressed uniformly, mostly in blue or camouflage uniforms. Radojica Nikcevic, former member of PJP in Pec, confirmed this, saying that in Kosovo, the uniformity principle was strictly observed in 1998 and 1999, with no exceptions.

In his cross-examination, the prosecutor showed the witness a photo taken in the summer of 1998, showing the witness standing with a group of his fellow fighters, including Goran Radosavljevic Guri, commander of the Operational Pursuit Groups in Kosovo. They were all dressed differently and the prosecutor remarked that at that particular moment 'the principle of uniformity was not very much observed'. According to Nikcevic, the photo was taken 'during a break', when they were not in action.

Explaining why the Serbian police almost never captured any KLA members despite its superiority, Nikcevic said that the 'terrorists carried their casualties away with them’. The prosecutor – alleging that the captives were mostly killed on the spot – asked then if that had happened in Racak. In January 1999, the Kosovo Verification Mission found bodies of 45 Kosovo Albanians there. Although the witness took part in that attack, the presiding judge stopped the questioning on that issue because the indictment against the six former Serbian political, military and police officials does not charge them with the crime in Racak. The witness managed to add that the KLA members carried their wounded and dead away with them ‘in many cases but not always’.

The Kosovo Six trial went on with the evidence given of Petar Dujkovic, who used to work in the Administration for Border Police in the Serbian interior ministry. Dujkovic is also testifying in Lukic's defense.