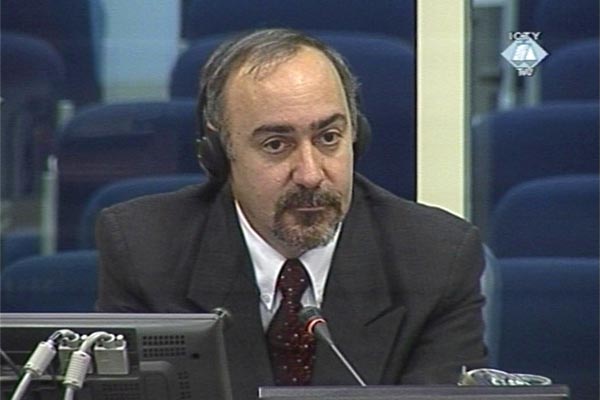 Richard Butler, witness in the trial of the former military and police officials for the crimes in Srebrenica
As the cross-examination of analyst Richard Butler continued, the defense counsel of accused Drago Nikolic, former security officer in the Zvornik Brigade, implied that Butler, himself a former US Army intelligence officer, had been implanted into the OTP in 1996 to be able to influence the course of the investigation of the Srebrenica crimes.

Canadian lawyer Stephan Bourgon, Nikolic’s counsel, noted that for the first five years of his service in the OTP, Butler had been receiving his salary from the US Army which had seconded him to the Tribunal. It was only in the last two years – from the fall of 2001 to the fall of 2003, that Butler was officially a UN staff member.

The military analyst confirmed this, adding that his first report drafted for the OTP had focused on the General Radislav Krstic case. As Butler explained, the initial idea was to create a data base for the OTP prosecutors and investigators to help them understand better the VRS system and the position and role of the Drina Corps, commanded by General Krstic.

Lawyers do not necessarily have military knowledge, Butler said, and his task was to advise prosecutors and investigators on how to prepare the case from the military aspect. Nikolic’s defense counsel interpreted this as a clear indication that Butler had ‘directed’ the Srebrenica investigation and related cases.

‘So you told them how to prepare the case instead of them giving orders to you’, Bourgon put it to Butler. Butler dismissed this, saying that he had an advisory role. To put it in military terms, he said, the prosecutors were his commanders.