Through the evidence of a military analyst and former US Army intelligence officer, the prosecution corroborates its allegation about a planned, organized and coordinated nature of the mass executions of men and the deportation of women and children following the arrival of Mladic’s troops in Srebrenica in July 1995 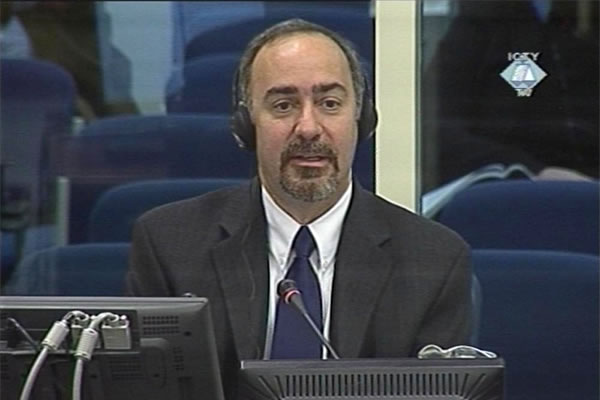 Richard Butler, witness in Popovic et a.l case/ Srebrenica & Zepa
Richard Butler was seconded to a team of military analysts working on the investigations in the former Yugoslavia, in accordance with an agreement between the OTP and the US Government. Their task was to analyze military activities related to the violations of international humanitarian law.

Because he was ‘assigned’ to the Srebrenica case, Butler said in the beginning of his evidence at the trial of sever Bosnian Serb military and police officers, he focused in particular on obtaining and analyzing all the available information on the VRS units deployed in Srebrenica and Zepa operations in the summer of 1995.

His task was to identify the VRS units engaged in these operations and in particular to identify the units linked with the crimes investigated by the OTP. As he described today, he had at his disposal documents seized in headquarters of the VRS Zvornik and Bratunac brigades and documents taken from the Drina Corps command and the Republika Srpska Interior Ministry. Butler also used the so-called open source information for his research – newspaper photos and documentaries where it was possible to identify ‘persons and weapons’ used in particular locations.

Butler’s comparative analysis was presented for the first time at the trial of General Radislav Krstic, the first Srebrenica trial, in 2000. In the meantime, Butler updated it with facts he discovered in the further course of his enquiry. Although he was skeptical about the transcripts of the intercepted conversations between the VRS officers recorded and written down the by the BH Army’s surveillance service, Butler found that the material was authentic. He reached this conclusion after he analyzed the technical capabilities of the surveillance service, documents from the Drina Corps units, contents of the intercepts and statements given by the surveillance service personnel. Although the American analyst noted that the VRS officers knew their conversations were tapped, they didn’t use this to mount ‘sophisticated campaigns to mislead the enemy’; their only concern was to prevent the leaking of some information.

At the beginning of his analysis of the structure, organization and functioning of the VRS, Butler noted that the Bosnian Serb army was modeled on the former JNA. Furthermore, the legislation on the armed forces in Republika Srpska was based on the legislation in the former SFRY. The chain of command in the VRS, the areas of responsibility and the powers of its officers followed the same system.

The US analyst continues his testimony tomorrow.