DID KENYA HAVE ‘SPECIAL INTEREST’ IN SREBRENICA?

Kenyan colonel Joseph Kingori dismissed the defense’s allegations that the UN military observers in Srebrenica were ‘partial and biased’. Kenya ‘had no special interest in Srebrenica that I would have defended there’, he said, adding that ‘even General Mladic paid credit to the impartiality and fairness of the UN military observers towards his people’ 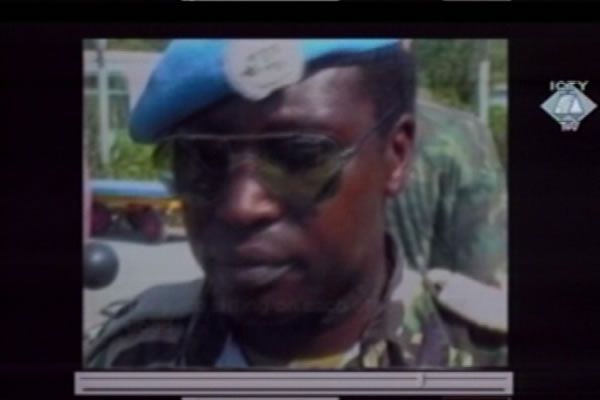 Joseph Kingori u Srebrenici
The defense teams of the seven accused Bosnian Serb military and police officers continued with their efforts to show the ‘partiality and bias’ of Joseph Kingori, former UN military observer in Srebrenica until the end of his cross-examination today. Kingori witnessed the fall of the enclave in July 1995 and the deportation of civilians following the arrival of Mladic’s forces.

According to the defense, even if the UN military observer mission was not ‘partial’, it had to be at least ‘incompetent’ for the task it was set for, because it failed to report ‘a single incident in which the BH Army shelled the population of Srebrenica in 1995’. The defense teams of Radivoje Miletic and Milan Gvero put it to the witness that the UN military observers also failed to report on ‘the abuse of humanitarian aid’. According to them, food that came in as humanitarian aid was sold at the Srebrenica market; some of it was confiscated by the BH Army. Kingori replied that the UNHCR had been notified about that, adding that some of the humanitarian aid was allotted to the military too.

The defense contends that the ‘partiality’ of military observers is evidenced by the fact that they didn’t report incidents with Serb civilian casualties. The Kenyan colonel dismissed this claim categorically, stressing that he was a ‘neutral observer’. He had no reason and no special interest to favor either side. ‘My country, Kenya, had no special interest in Srebrenica that I would have defended there’, Kingori said. In his words, even general Mladic gave credit to the UN military observers for being ‘impartial and fair towards his people’.

Military analyst Richard Butler will begin his testimony on Monday at the Srebrenica Seven trial.