In his evidence, Kenyan colonel Joseph Kingori, former UN military observer, says that ‘the Serbs openly demanded that all Muslims leave Srebrenica’. In the summer of 1995, Kingori witnessed the fall of the enclave under the nominal protection of the UN 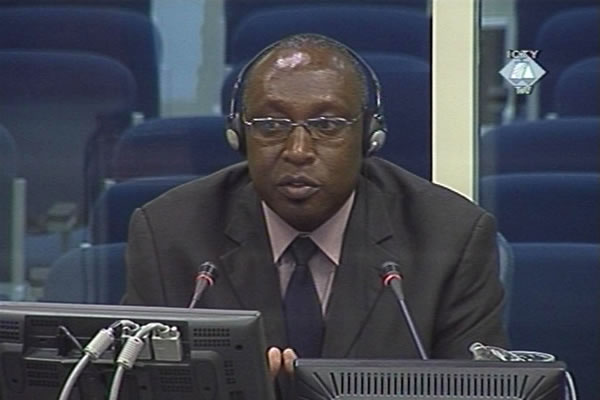 Joseph Kingori, witness in the trial of the officials charged with the crimes in Srebrenica
In his evidence today, Kenyan colonel Joseph Kingori said that ‘the Serbs demanded that Muslims – both soldiers and civilians – leave the enclave. If not, they would expel them by force.’ In the summer of 1995, Kingori, a UN military observer, witnessed the fall of the Srebrenica safe haven.

When the VRS began ‘the heaviest shelling of Srebrenica ever’ on 6 July 1995, Kingori and his colleague were in the UN military observers’ headquarters in the post office building. In his evidence at the trial of seven officers charged with crimes in Srebrenica and Zepa, he stated that they had been forced to withdraw to the UNPROFOR Dutch Battalion base in Potocari two days after the beginning of the attack.

Fleeing from Mladic’s troops that entered the town on 11 July, thousands of civilians from Srebrenica also sought shelter around the base in Potocari. The Kenyan officer reported that and the subsequent developments to the UN military observers’ headquarters in Sarajevo and Zagreb. Prosecutor Norman Thayer showed him the copies of his reports today.

His reports describe Kingori’s meeting with General Mladic. Kingori claims he warned Mladic that he had seen ‘men being separated from their families and being taken to a house nearby’. As Kingori said, Mladic took him to that house, assuring him that it was standard procedure and that ‘the men were all right’.

As Kingori recounted, ‘frightened people were crowded in there without enough air’. Mladic didn’t let him approach the captured Bosniaks and soon he was forced to leave the place. When the buses arrived to take the women and children to Kladanj, Serbian soldiers controlled who boarded the buses. The Kenyan officer went on to say that the soldiers separated ‘boys aged 14, 15 and 16 years’ and didn’t allow them to board the buses. He personally managed to save a few boys but was not able to help the men who had been separated previously and taken to the ‘white house’.

Kingori saw when the men were taken out of the ‘white house’ to board the buses. As he described it, they were ‘loaded rather than boarded’. Those who resisted were pushed in by force, one by one. They were like prisoners of war, without their personal possessions; they had to leave those in front of the house. According to Kingori, ‘this was maybe the most difficult moment in Srebrenica’ for him. He went on to describe how he saw ‘grown men cry’ and ask the UN representative to help them. ‘They asked why the UN is allowing them to be taken away, whether the UN knew they were to be killed because why else would they be separated from their families,’ Kingori said.

The Kenyan officer claims that UNPROFOR didn’t know where the captured Bosniaks were being taken because Mladic refused the offer of the UN vehicles and personally obtained the buses for the transfer of the prisoners to ‘their brothers in Tuzla’, as he put it. ‘It was terrible to see those people watching us, begging for help while we couldn’t do anything for them’, Joseph Kingori said. The former UN military observer in Srebrenica continues his evidence tomorrow.