Although the OTP made extensive use of Zoran Petrovic Pirocanac’s video materials in all its Srebrenica trials, it has not been in contact with him. What’s more, the prosecutors have treated him with disdain, calling him ‘so-called reporter’ and pretending they didn’t know if he was ‘a journalist or a policeman’ 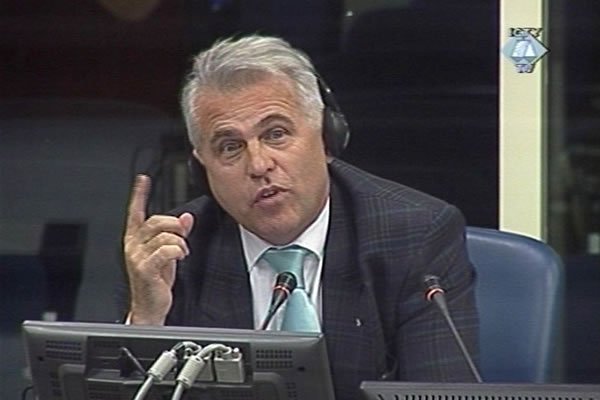 Zoran Petrovic Pirocanac, witness in the trial of the former Bosnian Serb officers charged with crimes in Srebrenica
In the first 45 minutes of his testimony at the trial of Bosnian Serb military and police officers charged with crimes in Srebrenica and Zepa, Belgrade journalist Zoran Petrovic Pirocanac addressed the court in three languages.

He first spoke French, expressing his deep disappointment and resentment by the treatment he received at the hands of the OTP over the past years. In all the Srebrenica trials before the Tribunal, the prosecutors made extensive use of the footage he filmed on 13 and 14 July 1995 in the Srebrenica area. At the same time, they called him ‘so-called reporter’ and pretended they didn’t know whether he was ‘a journalist or a policeman’. ‘My footage has been used,’ he complained, ‘but no one called me here’. The first to call him to testify was the accused Ljubomir Borovcanin, his ‘guide’ through Srebrenica in July 1995. ‘I want my people to know that,’ Petrovic said. He came to The Hague as a prosecution witness, after the Trial Chamber issued him a subpoena.

After telling the court what ailed him in French and explaining why he hadn’t come to testify earlier, Pirocanac presented himself in English as ‘an expert for geopolitical issues’, the ‘first free journalist in the former communist bloc’ and, switching back to French, as ‘le grand reporter’ – ‘a great reporter’ who covered ‘global topics’ and the events in Vukovar, Sarajevo, Majevica, Srebrenica and other battlefields in the ‘civil war in the former Yugoslavia’ as he described it.

Finally, as the session drew to a close today, Zoran Petrovic explained in Serbian how he met the accused Borovcanin in early 1994 when he reported from the Majevica frontline. This was where he saw ‘the first Mujahideen’. In July 1995, after the news came about the fall of Srebrenica, he managed to get in touch with Borovcanin, who met him on 13 July on the border. He took Petrovic through Bratunac to Potocari. It was there, in front of the Dutch Battalion compound, that Petrovic filmed the first takes of the video that has been used so extensively by the OTP over the past years, despite the derogatory attitude towards the author.

Zoran Petrovic will talk about what happened to the footage, the missing copies and deleted parts tomorrow afternoon.