WHAT SHOCKED BELGRADE JOURNALIST IN SREBRENICA

In his cross-examination, Zoran Petrovic Pirocanac, whose July 1995 video was admitted into evidence in all three Srebrenica trials, said that what shocked him the most in Srebrenica was a large number of ‘healthy and normal war children’ up to three years of age 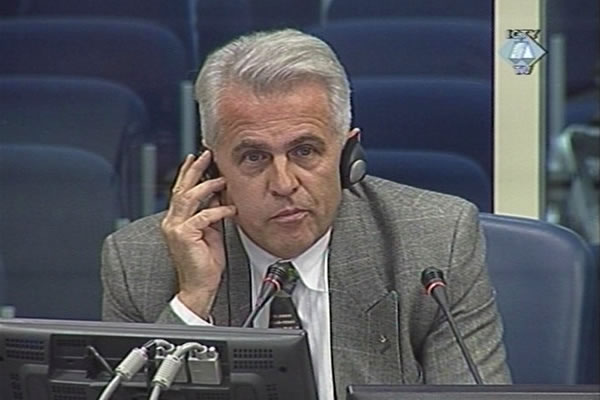 Zoran Petrovic Pirocanac, witness in the trial of the former Bosnian Serb military and police officials charged with crimes in Srebrenica
Judging by the finale of his evidence at the trial of the Bosnian Serb officers charged with crimes in Srebrenica and Zepa, the purpose of his Srebrenica mission on 13 and 14 July 1995 was not only to ‘document’, but also to do ‘geopolitical’ and above all ‘demographic’ research. In his stories from Srebrenica broadcast on local TV network Studio B and published in Belgrade magazine Intervju, Pirocanac depicted the ‘abnormal’ situation in the UN-protected enclave. On the eve of the arrival of Mladic’s troops, there were about 40,000 persons in Srebrenica; one third of them were children, ‘many of them up to three years of age’.

Zoran Petrovic Pirocanac, Belgrade journalist who has gone on to become ‘an expert for geopolitics’, as he introduced himself in the The Hague, thought the multitude of children was ‘an unbelievable sight’, something that shocked him. These were ‘not African children from Darfour, but very healthy and normal children’. In his view, this meant that ‘something was wrong’ with everything that was ‘said about Srebrenica, that people there were starving to death for lack of food’.

In his cross-examination he said this situation reminded him of a conversation with a ‘renowned French demographer’ who told him about the so-called ‘demographic warfare’. It is a procedure, he said, designed to ‘achieve a goal through rapid population growth’.

In his replies to the questions put to him by the defense of Ljubomir Borovcanin and Milan Gvero, Pirocanac tried to minimize the effect his documentary material – taken in July 1995 during the VRS Srebrenica operation – had on the determination of the facts of the crimes described in all the indictments for Srebrenica crimes issued by the OTP. Thanks to his footage, admitted into evidence in all the Srebrenica trials in the Hague, the OTP was able to identify a large number of participants in the Srebrenica operation. Some of them were indicted; others were interviewed as suspects and subpoenaed to testify.

Pirocanac contended today that he ‘saw no violence’ in Potocari and other places he visited on 13 and 14 July 1995. He denies having seen men being separated from women and children and taken into captivity. He described that the Dutch UNPROFOR soldiers ‘helped Serbs to evacuate’ the Bosniak civilians gathered there. Contrary to the prosecution’s allegations, the atmosphere was one of joint efforts to take care of the refugees. There were no tensions.

The prosecution is relying on the material recorded by the witness in 1995 and not what he said today about what he had seen there. In the re-examination, in an obvious effort to discredit him, the prosecutor asked Pirocanac to explain once again his views about the ‘abnormal’ population growth in wartime Srebrenica. A part of the documentary in which Pirocanac presents the so-called ‘war children’ was shown today once again in the courtroom. A part of an article he wrote was read. In it, Pirocanac quotes an unnamed source who cursed the Muslim priests and Islam because of the people from Srebrenica who ‘complain…but nevertheless continue to procreate’.

Pirocanac answered that he was just ‘quoting an opinion’ he had heard in the field. It was a documentary story. He wrote it in the ‘co-called verist’ style. He still believes that ‘it is not normal to have so many new-born babies in such circumstances’. The prosecution had no further questions for this witness after that statement.