After Avni Krasniqi, yet another unwilling prosecution witness changes his mind. Sadri Selca decides to testify at the trial of three former KLA commanders. After their evidence, the contempt of court charges against them were dropped and they were released from the UN Detention Unit 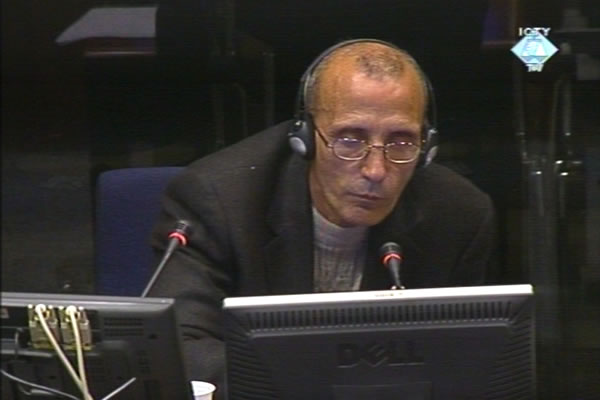 Sadri Selca, witness in the Haradinaj trial
The prosecution today dropped the contempt of court charges against two Kosovo Albanians, Avni Krasniqi and Sadri Selca, after they agreed to testify at the trial of Ramush Haradinaj, Idriz Balaj and Lahi Brahimaj. They were both arrested for failing to comply with subpoena to testify before the Tribunal. Having spent several days in detention, they changed their mind and agreed to testify.

Avni Krasniqi, former KLA member, began his evidence yesterday. He said that Idriz Gashi, a.k.a. Galani, a local commander from the village of Barane, killed Sanije Balaj, an Albanian woman from Kosovo, on 12 August 1998. According to Krasniqi, the second accused Idriz Balaj removed her body from the crime scene. Krasniqi claimed that he personally had taken part in the burial and subsequent exhumation of the body. At the time of the murder, he said, he was sitting in the car waiting for Galani to come back.

Idriz Balaj’s defense counsel today accused the witness of playing down his role in the murder in the hope of avoiding the blood revenge. According to him, Krasniqi has long borne a grudge against his client because he is convinced Balaj killed one of his friends in the war. That is why he has unjustly blamed his client for the cover-up of Sanije Balaj’s murder. Krasniqi said he didn’t know who this friend was supposed to be, sticking by his evidence in the examination-in-chief.

Another penitent witness, Sadri Selca, confirmed Krasniqi’s version of the killing. He was a military police officer and he carried out the investigation of Sanije Balaj’s killing a few days after the incident. In his statement to the OTP investigators which he confirmed today in the courtroom, Selca said that he had heard from ‘people close to Sanije Balaj’ that she had been killed by Galani. Her body was then moved to the Radonjic lake canal by Toger. Toger was the nom de guerre used by the second accused Balaj. In Selca’s cross-examination, Haradinaj’s defense counsel reminded him of what he had said in his statement: that some other people told him Sanije Balaj had been raped and then killed by Avni Krasniqi, who testified before Selca. Selca confirmed that he had heard this during his investigation he conducted but couldn’t remember who had told him that.

Yet another former KLA member was given a chance to change his mind and testify in this case. Shefqet Kabashi is due to testify on Tuesday via video link from an undisclosed location. Another witness, with the pseudonym 30, is scheduled to testify after Kabashi. Two days ago, he was to testify via video link but failed to show up, risking yet another indictment for contempt of court.

[IMAGE]3094[/IMAGE]As today’s hearing drew to a close, the court heard the evidence of Roel Versonen, an OTP investigator. In 2002, he showed a panel with eight photos to the protected witness with pseudonym 01. The witness was able to recognize Idriz Balaj as the person who had ordered the killing of Vukosava Markovic and Darinka Kovac in the spring of 1998. In his cross-examination, Versonen admitted there had been ‘slight departures’ from the proper procedure. Witness 01 died in the meantime, and the errors can’t be corrected.