After his refusal to testify at the trial of former KLA commanders and his subsequent arrest on contempt of court charges, Avni Krasniqi changed his mind and appeared in the courtroom today. Ramush Haradinaj appointed Idriz Gashi as the commander of the Podrimlje, he told the court. Gashi allegedly killed Sanije Balaj, an Albanian woman from Kosovo. The second accused Idriz Balaj then removed body from the crime scene in his Jeep, Krasniqi said 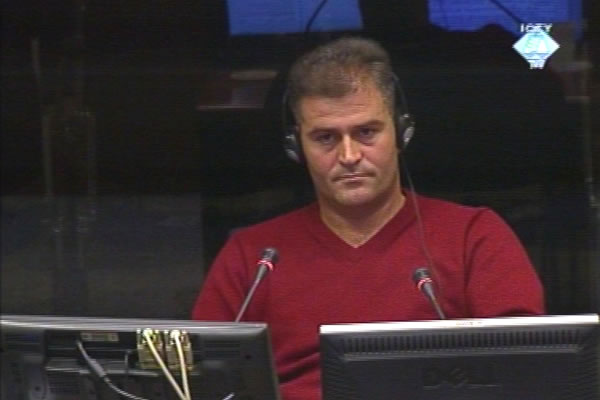 Avni Krasniqi, witness in the Haradinaj, Balaj and Brahimaj trial
After he was arrested last week on contempt of court charges for refusing to comply with a subpoena to testify at the trial of three former KLA commanders, Avni Krasniqi today decided he would testify. He gave evidence on the killing of Sanije Balaj, an Albanian woman from Kosovo. She was arrested by the KLA on 12 August 1998 and taken to the barracks in the village of Barane.

Krasniqi confirmed the claims of several previous prosecution witnesses: he and Idriz Gashi a.k.a. Galani took Sanije Balaj out of the barracks and drove her to Glodjani. Gashi ordered him to drive. He thought they were driving her to Haradinaj’s headquarters to be questioned about her notebook that contained phone numbers of Serbian police officers, he said. Halfway there, he recounted, Gashi ordered him to stop. Gashi then took Sanije Balaj to a nearby forest. Krasniqi claimed he had stayed in the car, adding that soon after he heard three gun shots. Gashi came back alone and told him to drive back to Barane.

Later that day, Krasniqi and a few other KLA soldiers returned to the crime scene. They wanted to bury the body. Some other people showed up because they heard that somebody had been killed there. Among them was Ahmet Ukaj, prosecution witness who testified at this trial yesterday, and his brother. Gashi ordered them to help to dig the grave and they did so. Three days later, Krasniqi and Gashi came back to the same spot to dig up the body and transfer it to ’a safer place’. On this occasion they were accompanied by the second accused Idriz Balaj. They put the body in his Jeep. After that, Krasniqi said, he was taken back to his home village, Vranovac, while Idriz Balaj drove off with Sanije Balaj’s body ‘in the direction of Glodjani or Barane’.

Apart from implicating Idriz Balaj in the removal of the body, Krasniqi said that Idriz Gashi, who had killed Sanije Balaj, was appointed the commander of the Podrimlje area by Ramush Haradinaj. According to him, Gashi was under Haradinaj’s command in 1998, but could not be sure if Gashi sent any reports to Haradinaj.

The cross-examination of Avni Krasniqi began today and will continue tomorrow.