The Appeals Chamber dismissed all grounds for appeal filed by Dragan Zelenovic and confirmed the sentence imposed by the Trial Chamber. He was sentenced to 15 years in prison for rapes and torture in Foca in 1992 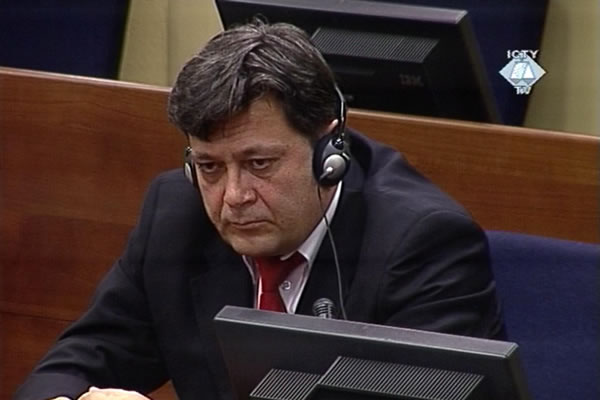 Dragan Zelenovic in the courtroom
ICTY Appeals Chamber confirmed today the sentence of 15 years in prison for Dragan Zelenovic. This sentence was imposed by the Trial Chamber for rape and torture of Bosniak girls and women in Foca in 1992.

In his appeal, Zelenovic noted that the Trial Chamber failed to give full consideration to his guilty plea for the Foca rapes and to the positive effect of this on the victims of his crimes, who didn’t have to come to The Hague to testify and were thus spared further trauma. Zelenovic claimed that not enough weight was given to his ‘considerable co-operation’ with the OTP and the fact that the Trial Chamber did not take into account the judgment delivered by the BH State Court in Sarajevo in the Radovan Stankovic case. Stankovic was also convicted for rapes in Foca.

The Appeals Chamber found that the Trial Chamber gave a reasonable consideration to the mitigating circumstances in his case when it sentenced him to 15 years in prison. The Appeals Chamber dismissed today all grounds of Zelenovic’s appeal and confirmed his first-instance sentence.

Zelenovic has already spent 26 months in detention, first in Russia where he was in hiding prior to his arrest in August 2005 and afterwards in the UN Detention Unit where he was transferred in June 2006. This period will be credited against his sentence.

The judgment delivered by the Appeals Chamber closed the Foca rapes case before the Tribunal. The case was opened in June 1996 with the indictment against eight accused members of the Bosnian Serb army and police. The accused Dragan Gagovic and Janko Janjic were killed resisting arrest. Three of the accused, Dragoljub Kunarac, Radomir Kovac and Zoran Vukovic were sentenced to 28, 20 and 12 years in prison respectively. The cases of Radovan Stankovic and Gojko Jankovic were referred to the BH courts. Jankovic was sentenced to 34 years by the State Court. Stankovic was sentenced to 20 years but has in the meantime escaped from the Foca prison where he was serving his sentence.