Dragan Zelenovic heard his sentence today, after pleading guilty to rape and torture of Bosniak women and girls in Foca in 1992. The Trial Chamber sentenced him to fifteen years in prison, going for the highest sentence recommended by the prosecution 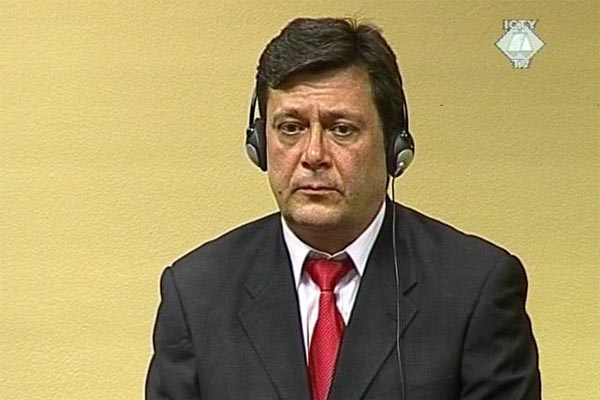 Dragan Zelenovic during the sentencing
Finding that the crimes the accused committed and pleaded guilty to were “part of a pattern of sexual abuse” against Bosniak girls and women in the Foca area in 1992, the Trial Chamber sentenced Dragan Zelenovic to 15 year in prison. It was the higher end of the sentencing recommendation put forth by the prosecution. In its sentencing brief, it called for 10 to 15 years in prison for Zelenovic. His defense recommended a milder sentence. 7 to 10 years.

Zelenovic was found guilty of the perpetration of nine rapes and co-perpetration of two other rapes. One of his victims was a 15 year-old girl who testified as Witness 87. In determining the sentence, presiding judge Orie noted today, the Trial Chamber considered the severity and large scale of the crimes and substantial participation of the accused in them. Among aggravating circumstances Judge Orie listed the vulnerability of victims, their unspeakable pain and humiliation and the deep and permanent scars that rape victims bear.

The Trial Chamber took Zelenovic’s guilty plea and his cooperation with the OTP in mitigation. Another mitigating factor was Zelenovic’s “sincere remorse” he expressed to the judges at the sentencing hearing. Without the mitigating factors, Zelenovic would apparently have received a much harsher sentence.

The indictment for rape, torture and sexual enslavement of Bosniak girls and women in Foca was issued back in June 1996 against eight Bosnian Serb military and police officers. Two of them, Dragan Gagovic and Janko Janjic, were killed while resisting arrest. Three of the accused were convicted by the ICTY: Dragoljub Kunarac was sentenced to 28, Radomir Kovac to 20 and Zoran Vukovic to 12 years. Their sentences were confirmed on appeal. Two of the cases were referred to BH courts. The cases of Radovan Stankovic and Gojko Jankovic are currently under appeal, following their sentencing to 16 and 34 years respectively.

Zelenovic evaded justice for the longest time. When the indictment was issued, he left Foca for Belgrade and then fled to Russia using false papers. There he was arrested in 2005 and in June 2006 was deported to Bosnia Herzegovina. From there he was transferred to the Tribunal. At his initial appearance, he pleaded not guilty. However, after his case was brought before the referral chamber, he then changed his mind and struck a plea agreement with the OTP.