PROSECUTION FILES NOTICE OF APPEAL AGAINST MRKSIC AND SLJIVANCANIN JUDGMENT

Noting errors of fact and law in the first-instance judgment, the prosecution asks the Appeals Chamber to find Mrksic and Sljivancanin guilty of crimes against humanity and impose a harsher judgment. The prosecution will not appeal against the acquittal of Miroslav Radic 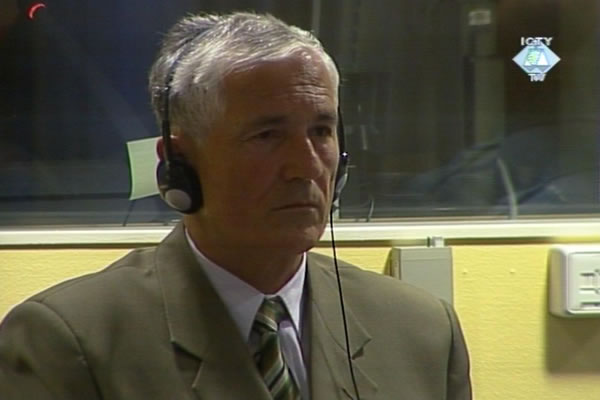 Mile Mrksic during the sentencing
The ICTY prosecution filed notice of appeal against the first-instance judgment in the Vukovar Three case. The Trial Chamber delivered the judgment in the case of the three former JNA officers on 27 September 2007. The first accused Mile Mrksic was found guilty of aiding and abetting the torture and murder of about 200 prisoners at Ovcara in Vukovar and was sentenced to 20 years. Veselin Sljivancanin was sentenced to 5 years in prison for aiding and abetting the torture of prisoners in Ovcara, while Miroslav Radic was acquitted on all counts of the indictment.

The prosecution filed notice of appeal against the judgment and sentence for Mrksic and Sljivancanin. It will not appeal against Radic’s acquittal which has thus become final. The Trial Chamber erred in law, the notice states, when it acquitted Mrksic and Sljivancanin of crimes against humanity because it found that the Ovcara victims had not been civilians but persons ‘known or believed to have participated in combat’. According to the prosecution, the term ‘civilian’ in the sense of Article 5 of the ICTY Statute includes ‘persons who are hors de combat’. The prosecution asks the Appeals Chamber to find Mrksic and Sljivancanin guilty of crimes against humanity and to impose a harsher sentence.

[IMAGE]2970[/IMAGE]The prosecution went on to state the Trial Chamber erred both in fact and in law when it acquitted Sljivancanin of the charges of aiding and abetting murder. The Trial Chamber concluded that his responsibility ended at the moment when last JNA soldier withdrew from Ovcara leaving the prisoners at the mercy of the Territorial Defense troops and the Chetniks. The prosecution believes that Sljivancanin knew the prisoners were to be killed and that it was his responsibility to protect them ‘in the afternoon, evening and night between the 20 November and 21 November 1991’. The prosecution urges the Appeals Chamber to find Sljivancanin guilty of murder as a violation of laws and customs of war and as a crime against humanity.

The prosecution also appeals against the sentences the two accused officers received: Mrksic was sentenced to 20 and Sljivancanin to 5 years in prison. According to the prosecution, these sentences are patently inadequate and do not reflect the gravity of the crimes they were convicted of. Mrksic was found guilty of aiding and abetting torture and murder and Sljivancanin of aiding and abetting the torture of some 200 prisoners in Ovcara.