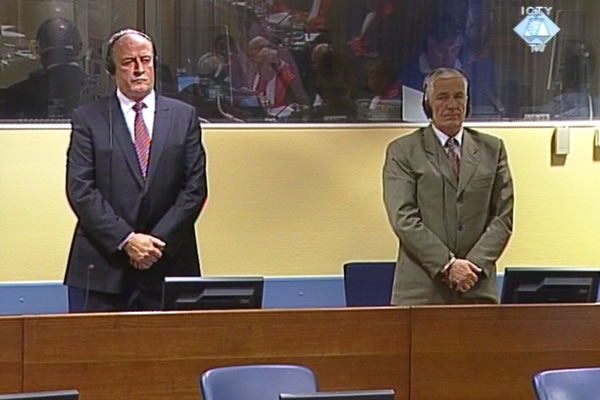 Veselin Šljivančanin i Mile Mrkšić u sudnici Tribunala za vrijeme izricanja presude
In its judgment, the Appeals Chamber found Veselin Sljivancanin, former chief of security in the JNA Guards Brigade, guilty of aiding and abetting murder of at least 194 prisoners of war at the Ovcara farm on 20 November 1991. The sentence of five years imposed by the Trial Chamber was increased to 17 years. This part of the judgment was reached with a majority of votes of the five-member Appeals Chamber, with three votes for and two against.

The majority in the Appeals Chamber found the five-year sentence imposed to Sljivancanin by the Trial Chamber to be ‘unreasonable’. Crimes committed at the Grabovo execution site near Ovcara were characterized, in the opinion of the judges, ‘by extreme cruelty and brutality towards the prisoners of war, some of whom may have been previously injured as they had been taken from the Vukovar hospital’.

In its judgment handed down in September 2007 the Trial Chamber concluded that the prisoners of war were first taken from the Vukovar hospital to the former JNA barracks and were then transferred to a hangar on Ovcara. In the evening, Colonel Mrksic ordered the military police to withdraw from the hangar leaving the prisoners at the mercy of the local territorial defense and paramilitaries even though Mrksic was aware of their ‘hostility towards the Croatian forces’.

Judge Pocar agrees with the conclusions of the majority in the Appeals Chamber, but in his separate opinion, he notes that the case should be referred back to the Trial Chamber which should then impose a new sentence on Sljivancanin for aiding and abetting the murder of prisoners on Ovcara. In her separate opinion, Judge Vaz says she is not convinced beyond reasonable doubt that all elements were met to convict Sljivancanin on charges of aiding and abetting murder.

Although it partially granted the first prosecution ground of appeal, establishing that persons ‘hors de combat’ can also be victims of crimes against humanity, and not only civilians, the Appeals Chamber reaffirmed Mrksic’s and Sljivancanin’s acquittal for those crimes. According to the judges, ‘the perpetrators of the crimes acted in the belief that their actions were directed against the Croatian armed forces’. This is why their intention to launch a systematic and widespread attack against the civilian population of Vukovar could not be established. Other prosecution grounds of appeal were rejected together with the appeals filed by the two convicted.

The time the two convicted former JNA officers have spent in the UN Detention Unit will be credited against their prison sentences. Mrksic surrendered on 15 May 2002 and was transferred to the Tribunal the same day. Sljivancanin was arrested in Belgrade on 13 June 2003. Sljivancanin, who was granted provisional release on 12 December 2007, returned to the UN Detention Unit yesterday, a day before the Appeal Chamber delivered its judgment.