After the prosecution called for a life imprisonment for the Vukovar Three, the defense counsel of Mile Mrksic and Miroslav Radic presented their closing arguments, denying all allegations made by the prosecution and calling for the acquittal of the former JNA officers charged with the Ovcara massacre 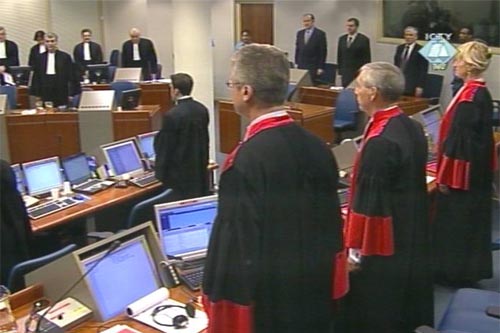 "Vukovar three" in the courtroom
In their closing arguments, the defense counsel of Mile Mrksic and Miroslav Radic called for the acquittal of the two former JNA officers on the charges of the murder of 264 persons at Ovcara on 20 November 1991.

Miroslav Vasic representing Colonel Mrksic said that the former commander of the JNA operation in Vukovar had had "nothing to do with the transport and selection of prisoners in the Vukovar hospital". In his view, this task was carried out by a team of security officers who arrived in Vukovar from the Belgrade Security Administration.

The prosecution argued that Mrksic had given the order to take the prisoners from the hospital to the JNA barracks and then to the Ovcara farm. In the evening, Mrksic ordered the military police company to withdraw from the hangar at Ovcara. The prisoners were thus left at the mercy of the local Territorial Defense members, who executed them that night. The defense challenges this allegation, arguing that Mrksic "did not give orders for the prisoners to be handed over to the Territorial Defense and for the military police to withdraw”. At that time, Mrksic was not in the brigade headquarters in Negoslavci at all. He was on his way to Belgrade where he was to meet the federal defense secretary Veljko Kadijevic the next day.

Vasic noted that "a number of witnesses who testified against Mrksic should have been in the indictment themselves". Among them were the officers of the 80th Motorized Brigade because Ovcara was in their area of responsibility. They were thus guarding the prisoners of war who were later executed, the defense counsel said.

Miroslav Radic's defense counsel started and ended his closing argument with a quotation from the epic poem Mountain Wreath, saying that "Life’s honor may be stain’d through fear of death". Radic opted for this philosophical approach and this led him to decide to tell the truth in his testimony about the events in Vukovar, his defense counsel Borovic noted. He added that Radic "condemns the Ovcara massacre as a heinous and cowardly crime".

All witnesses against Radic except Juraj Njavro, a Vukovar Hospital doctor, testified under protective measures, Borovic noted. This means that "the public in Serbia and Croatia will never know what the evidence against the accused was". He denied that Radic "participated in the adoption of a plan to persecute the inhabitants of Vukovar, in the selection of the prisoners in the hospital and in their transfer to buses". Radic came to the hospital at a later stage on 20 November 1991 and was not in the JNA barracks when the prisoners arrived. He was not at Ovcara either. He was not aware of the threats the prisoners were exposed to or the events that followed, his defense counsel claimed. He went on to say that Radic controlled neither the Vukovar Territorial Defense nor Seselj's men from the Leva Supoderica detachment. Those units have been identified as the direct perpetrators of the crime. It was not up to him to punish them for the crime they committed. On the morning of 21 November 1991 those units were resubordinated to the 80th Motorized Brigade.