Johan Tarculovski’s defense counsel put it to witness Nazim Bushi that the National Liberation Army, a Macedonian Albanian formation, was a terrorist organization. Bushi disagreed. When international officials described the NLA members as ‘terrorists, thugs and killers’, they did so because they misunderstood the term ‘terrorism’, Bushi says 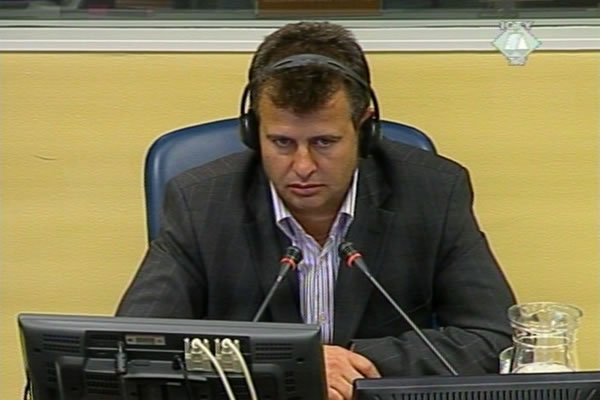 Nazim Bushi, witness in the Boskoski and Tarculovski trial
In the cross-examination of Nazim Bushi, Johan Tarculovski’s defense counsel picked up the line of questioning started by Ljube Boskoski’s defense. Both accused contend that the National Liberation Army was a terrorist organization whose members did not abide by military principles and did not enjoy the support of the people. Bushi was the commander of the 114th Brigade in the NLA.

Tarculovski’s defense counsel showed the witness a few video clips where international mediators ‘condemn most strenuously the extremist actions of a group of terrorists, thugs and killers’. On the other hand, they ‘support the actions of the Macedonian Army and police’. In an interview shown in court, British ambassador to Macedonia, Mark Dickinson says that the Macedonian Army and police ‘have the right to defend themselves, their state and their people’.

Bushi’s reply was that he was ‘convinced the gentlemen didn’t know the meaning of the term terrorism’ and that the real situation differed from the picture the international mediators painted in their statements.

Johan Tarculovski’s defense counsel followed up on the cross-examination by Boskoski’s defense, claiming that Ljuboten was a logistics base of the National Liberation Army, used as a hideout by the members of that formation, in uniform and in civilian clothes. Tarculovski’s defense argues that Bushi ordered a mine to be laid near Ljuboten. Eight Macedonian soldiers died in the explosion. The purpose was to ‘intimidate’ the military and police who had decided to cut off the supplies of food, weapons and ammunition from Ljuboten to Bushi’s 114th Brigade stationed in Lipkovo.

Bushi did not accept the suggestion, claiming that none of the persons killed in Ljuboten on 12 August 2001 had been in uniform or had carried weapons. According to him, those were the hallmarks of the NLA soldiers. He denied once again having issued any orders related to Ljuboten.

The defense counsel also claimed that some NLA members were younger than 14 and older than 65 and that they wore the Kosovo Liberation Army uniform, having merely put on new insignia. Bushi’s reaction to this was heated again. He accused the defense counsel he is ‘merely looking for a way to justify the murder of a seven-year-old child in Ljuboten’.