The prosecution delivers its opening statement in three parts at the start of the Ljuboten trial. There was armed conflict in Macedonia, the prosecution notes. Ljube Boskoski has command responsibility and Johan Tarculovski has individual responsibility for the attack on Ljuboten village on 12 August 2001. First witnesses in this case will be called on 7 May 2007 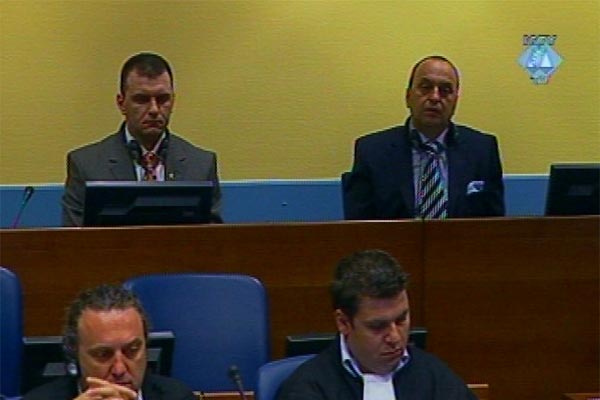 Ljube Boskoski and Johan Tarculovski in the courtroom
The first Macedonian trial officially began in The Hague today with the opening statement of the prosecution. The case concerns the crime committed by the Macedonian police special unit on 12 August 2001 in the village of Ljuboten, 10 km from the Skopje city centre. Ljube Boskoski, the then Macedonian interior minister, and Johan Tarculovski, commander of the special police unit that carried out the attack on the village are charged with the murder, cruel treatment and wanton destruction.

[IMAGE]2613[/IMAGE]The opening statement of the prosecution was divided into three parts. In the first part Daniel Saxon, lead counsel in this case, outlined the situation at the time referred to by the indictment saying that that there had been armed conflict in Macedonia at the time, between the ONA – a political and military association of Macedonian Albanians headed by Ali Ahmeti – and the Macedonian police and military.

According to Saxon, the ONA had about 6,000 members in 6 brigades. It was armed with infantry weapons mostly, but they also had rocket launchers, howitzers and antiaircraft guns. In the first half of 2001, using guerrilla tactics, the ONA controlled about 20 percent Macedonian territory. By June 2001, it came to 10 km from Skopje and in August 2001 it surrounded Tetovo, cutting off the highway and establishing its checkpoints.

The second part of the opening statement addressed the crimes described in the indictment and the criminal responsibility of the accused Johan Tarculovski. Prosecutor Joanna Motoika said that the attack on Ljuboten followed after a Macedonian military vehicle came upon a mine planted by the ONA. The explosion killed eight Macedonian soldiers. In the next two days, the army shelled Ljuboten. In the early morning hours of 12 August 2001, the special police unit entered the village. According to the prosecution, the unit was handpicked and armed by Tarculovski following the orders issued by minister Boskoski, his superior. Seven Albanian civilians, whose names are listed in the indictment, were killed in three separate incidents of the attack. Fourteen houses were either destroyed by shells or burned to the ground. More then hundred civilians were taken to different locations where they were continuously beaten by police officers, prison guards, civilians and even hospital staff.

The prosecution holds Johan Tarculovski individually responsible for this crime, while Boskoski is charged with command responsibility. Boskoski allegedly knew about the crime but failed to investigate it and punish the perpetrators. Concluding the opening statement, prosecutor Saxon stressed that Boskoski had been in Ljuboten on the day of the attack. Behind the cover of the so called ‘China wall’ he watched the attack, the abuse of the civilians and the burning of the houses. The prosecutor illustrated the point by playing a video tape in court.