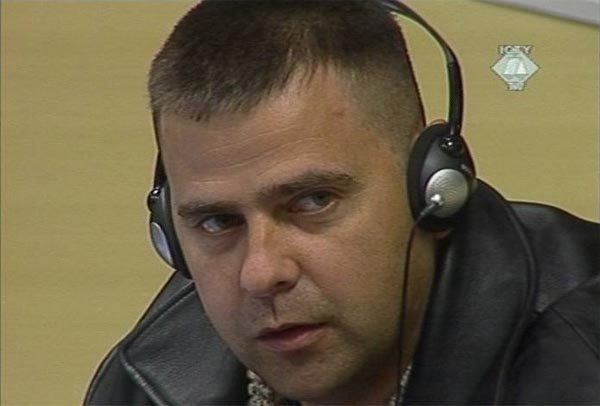 Stanisa Radosevic, witness in the Haradinaj, Balaj and Brahimaj trial
Ramush Haradinaj’s defense was today the proverbial girl who wants to get married and yet remain a virgin, as it tried to challenge the credibility of a report filed by the Humanitarian Law Centre (HLC) about the crimes against Kosovo Serbs and at the same time, referred to the reports made by the same NGO about the crimes against Kosovo Albanians as “indisputable facts”.

Haradinaj's defense counsel Ben Emmerson tried this tactics in the cross-examination of Stanisa Radosevic, who testified about the incidents in the village of Dasinovac near Decani in April 1998. In the first incident, on 21 April 1998, the witness was traveling from Decani to Dasinovac in a car with his mother and a friend. Some KLA members stopped the car and took them to their headquarters in Glodjani. The two men were interrogated and beaten there, and the witness was then ordered to go back home and bring the hunting rifles that belonged to his father. His mother and friend were kept as hostages. The witness tool a rifle from his home, but was stopped again by KLA members as he went back to Glodjani. He managed to persuade them to allow him to continue to Decani, by promising he would bring another rifle. He went to the police instead and reported the incident. He was soon told that a police officer had encountered his mother and friend waling to Decani.

The next day, the witness met a friend from Dasinovac who told him that the KLA members had attacked his father’s house, captured him and taken him away together with an elderly Serbian couple. The bodies of Slobodan Radosevic and Milos Radunovic were found four months later near a village road. Milica Radunovic is still missing. The witness then talked to an Albanian neighbor who told him that he had tried to protect his father but that the KLA members had then beaten him “for protecting the Serbs”.

In his cross-examination, Haradinaj’s defense counsel showed the witness a statement he had given to the Humanitarian Law Centre in April 1996. The statement says that he and his mother “fled the village in fear of the KLA”. The witness claims he did not say that, stressing that on 21 April they were intercepted and captured as they were going back from Decani to their village, where they were “on good terms with Albanian neighbors”.

Haradinaj’s defense counsel first concluded that the statement the witness had given to the Centre was “not true” and that the person who had taken to statement “invented the whole thing”. He then went on to quote another report filed by the Humanitarian Law Centre about the events in Cirez, Likosani and Prekaz in late February and early March 1998. About 80 Albanians were killed in those incidents, including a number of women and children. Emmerson quoted the reports as “indisputable facts”. The witness replied that he had heard about the events, but could not believe that so many people had been killed.

The case put forward by Haradinaj’s defense is that the Albanians were “very frightened” after the incidents in Cirez, Likosani and Prekaz, and that they “armed and organized themselves” to defend their villages if they came under attack. Emmerson tried to prove this point by noting that the men who had stopped the witness, his mother and friend on 21 April 1998 had been “chaotically organized”, had had no commander or any communications equipment, had argued for a long time about what to do with the captives. Most were in civilian clothes, and few had rag tag uniforms.