In its pre-trial brief, the prosecution noted that protected witness 38 had heard a KLA soldier say, “Commander Ramush Haradinaj, the people we’ve captured are at your disposal”. In her cross-examination, the witness denied having ever said that. Now she says she heard only one word, "commander". Later when she saw a man on TV, she identified Ramush Haradinaj 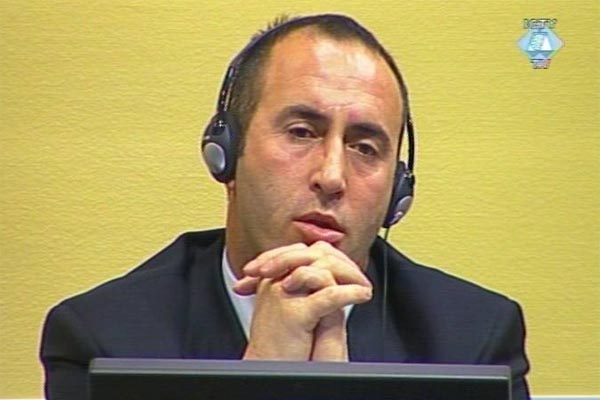 Ramush Haradinaj in the courtroom
At the trial of Ramush Haradinaj, Idriz Balaj and Lahi Brahimaj, the prosecution started with the crime base evidence, beginning with the first two counts in the indictment. They refer to the events of May 1998 in the village of Junik near Decani.

The witness gave evidence with her identity, image and voice protected because she had received death threats before coming to The Hague. She described how the KLA members expelled her and her family from Junik. She said that all non-Albanians were expelled from Junik then, along with her Roma family.

They joined the refugee column and at one point, KLA soldiers singled out her and her family and took them to a mill in Gacifer, a nearby hamlet. There, a KLA member she knew from Junik grabbed her father by his moustache and tore some skin off. He ordered her to strip naked. Then he beat and humiliated them, and tied them up with barbed wire. The abuse stopped when a jeep with two uniformed men arrived. She heard the others call one of them "commander", and she was able to identify him as Ramush Haradinaj when she saw him on TV a few months later.

The abuse continued after the two men in the jeep left, the witness said. They were then taken to the village of Jasic where they spent two days under guard in open air. She was allowed to dress only two days later when she started to shake with fever.

On the third day of their captivity, they were taken to a cliff near Albanian border, the witness said. She described what followed in closed session. The questions asked by the defense counsel later and the allegations in the indictment indicate that the witness and her family were lined up for execution but somehow managed to escape down the mountain slopes. They ran to the village of Batusa where they were taken in and assisted by the Yugoslav Army troops.

In her cross-examination, Ramush Haradinaj’s defense counsel pointed to some discrepancies in the statement the witness had given to the Serbian Interior Ministry in 1998 and 2002, the statement taken by the OTP in 2005, the proofing sessions before her testimony and the evidence she gave in her examination in-chief. The defense counsel did not contest the fact that the witness and her family were expelled from Junik and abused by the KLA. He focused on contesting the claim that "the man from the jeep" was really his client.

Although she claimed that she had recognized Haradinaj a few months after the events in Junik, the witness never mentioned his name in the statements to the Serbian Interior Ministry in 1998 and 2002. Contrary to that, in the statement taken by the OTP in 2005 she said that the KLA soldier that was abusing them near the mill said to the man from the jeep, "Commander Ramush Haradinaj, the people we captured are at your disposal". This statement is listed in the pretrial brief filed by the prosecution.

The witness denied saying this and when British attorney Ben Emmerson asked her if "the investigators had made this up" she replied that it was maybe a "translation error". She apologized, stressing that her statement was taken while she was "ill and traumatized" with "high levels of blood sugar, lipids and blood pressure".

When the witness said that she had spent three days naked in the rain, Idriz Balaj's defense counsel said that the meteorological reports he had obtained showed no rain in Kosovo on 28th, 29th and 30th. He did not tender the reports into evidence, indicating he would do that later.