SERBIAN AND ALBANIAN VERSION OF THE CONFLICT IN GLODJANI

The first prosecution witness at the trial of Ramush Haradinaj, Idriz Balaj and Lahi Brahimaj worked as an investigator for the Humanitarian Law Centre in the spring of 1998. She took statements from Serbs who claimed that they had been attacked by armed Albanians. In the cross-examination, the defense compared some of these statements with the statements given by Kosovo Albanians to another investigator of the same NGO at the same time 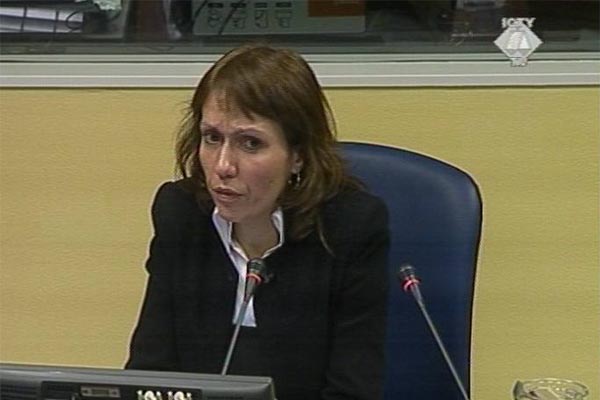 Marijana Andjelkovic, witness in the Haradinaj, Balaj and Brahimaj trial
The start of the prosecution case at the trial of three former KLA commanders was marked by considerable confusion caused by "a selective translation" of the notebook in which witness Marijana Andjelkovic wrote down statements taken from persons she interviewed in Kosovo in the spring of 1998. Andjelkovic was an investigator with the Humanitarian Law Centre, a Belgrade-based non-governmental organization. She visited a number of villages in western Kosovo and talked to Serbs, Montenegrins and Roma who claimed they were victims of armed persons who spoke Albanian.

Her testimony was interrupted yesterday when it was discovered that the defense had not been given the translation of the parts of what was written in the notebook where mention was made of the kidnapped Serbs and several names of victims listed in the indictment against Ramush Haradinaj, Idriz Balaj and Lahi Brahimaj. Prosecutor David Re explained today that the notebooks were translated by "different translators, one for the Roman and the other for Cyrillic text". Their translations were never incorporated into a single document.

Today Marijana Andjelkovic highlighted parts of the HLC report that include interviews she conducted in March and April 1998. One of them is a report on the conflict about the Haradinaj family property in Glodjani on 24 March 1998. There are also two missing persons reports, one related to "the disappearance of Albanians that could be attributed to the police", and the other about "the disappearance of Serbs that could be attributed to the KLA".

At the end of the examination-in chief, Mirjana Andjelkovic summarized her impressions from the visit to Kosovo in the spring of 1998. She noted "the increase of tensions in smaller villages around Decani", increased police presence, "general anxiety and unrest", "increased fear among Montenegrins and Serbs" who left their villages after Easter 1998 and went to larger towns. The main reasons that prompted them to leave, she noted, were the "uncertainty and fear of armed people who spoke Albanian", who would fire at their houses during night, take them to be interrogated and mistreated in their headquarters or stop, search and question them on the roads around Decani. The Serbian villagers she talked to did not identify the "armed people" as the KLA. The police at the check points called them "terrorists".

In the cross-examination, the defense counsel representing Ramush Haradinaj and Idriz Balaj noted that at the time the witness had been talking to Serbian villagers in the Decani area, her colleague from the HLC had been collecting statements from Albanians in Glodjani and other villages regarding the events of 24 March 1998. The defense counsel argued that those statements painted a totally different picture of the circumstances leading to the conflict and its aftermath from the one in the statement Vladimir and Ljubica Stojanovic gave to Marijana Andjelkovic. The Stojanovic family were the Haradinaj family’s next door neighbors.

Vladimir and Ljubica Stojanovic talked to the witness in Decani and said that fire had been opened on the police from the Haradinaj family property. The police returned fire. Dozens of Albanians who talked to her HLC colleague said this had in fact been a massive police attack with helicopters from which fire was opened at civilians. School children were used as human shields, a number of civilians were arrested and heavy artillery was used to shell the houses.

The prosecution continues its case against Haradinaj, Balaj and Brahimaj tomorrow.