There was "nothing noble, heroic, patriotic or honorable" in the crimes three former KLA commanders are charged with. Carla Del Ponte emphasized this in her opening statement at the trial of Ramush Haradinaj, Idriz Balaj and Lahi Brahimaj. The crimes were "brutal and bloody murders", she said 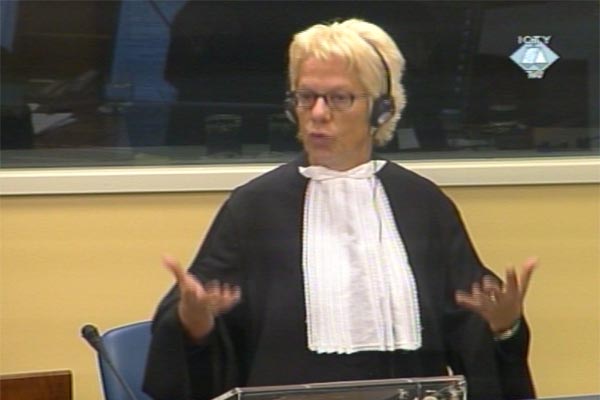 Carla del Ponte
The second trial for Kosovo crimes committed by the KLA members in 1998 opened today at the Tribunal. Carla Del Ponte appeared in court and described the three accused as "gangsters who wore uniforms and had control". She called the first accused Ramush Haradinaj "a warlord", and Idriz Balaj and Lahi Brahimaj, the other two accused, "his lieutenant and his prison guard".

Del Ponte stressed that there was "nothing noble, heroic, patriotic or honorable" in the crimes they are charged with. Those were "brutal and bloody murders".

In her opening statement, Del Ponte admitted that the prosecution would “not have an easy task” proving the guilt of the three accused KLA commanders. Some people did not want this indictment to be issued at all, she noted, and few supported it, internationally and locally. A major problem, Chief Prosecutor noted, is "the reluctance of many witnesses" to come to The Hague and take the stand at the trial of former KLA commanders, because of threats and intimidation.

The mention of intimidation prompted Gregor Guy-Smith, Idriz Balaj's American defense counsel, to object. He said the chief prosecutor's speech was "not only partial, but also beyond the scope of the opening statement". Presiding judge Alphons Orie agreed that it was "inappropriate" to speculate in the opening statement whether the witnesses would be telling the truth or not. Yet he then invited the chief prosecutor to proceed.

Del Ponte noted she merely wanted to acquaint the Chamber with the fact that the witnesses had been threatened. In fact, this weekend she received reports that the witnesses who were supposed to testify at this trial had received threats. "If the witnesses do not appear here I will be forced to drop the charges", Carla Del Ponte said.