DEFENSE: HARADINAJ IS NOT A WAR CRIMINAL

In his opening statement, English attorney Ben Emerson contested the applicability of the principle of joint criminal enterprise in this case, claiming that the prosecution "has stretched the concept to its limits" in order to make Haradinaj responsible for "the crimes of all armed Albanians in western Kosovo" 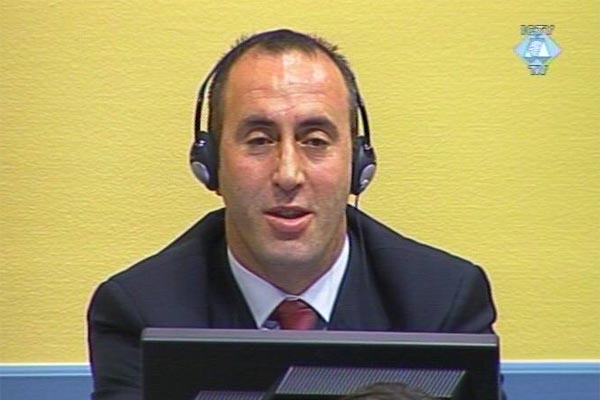 Ramush Haradinaj in the courtroom
"Ramush Haradinaj is not a war criminal. The charges against him are not substantiated and the decision of the prosecution to charge him is not just". This is how English attorney Ben Emerson concluded tonight his opening statement at the start of the trial of the three former KLA commanders charged with crimes committed in Kosovo between March and September 1998.

Emerson, Ramush Haradinaj's defense counsel, contested the applicability of the joint criminal enterprise principle in this case, noting that the prosecution had stretched the concept to its limits. His client could consequently be found responsible for "the crimes committed by every armed Albanian in western Kosovo". Emerson believes the prosecution is operating on the assumption that there "must have been some implicit agreement to commit crimes aimed at establishing control over the territory". The defense claims that there “was no criminal conspiracy". The aim of the KLA in western Kosovo was to "protect the people from the Serbian aggression and to fight for a free and independent Kosovo". This, he added, has now been "recognized by the international community".

Contesting the prosecution's argument that the bodies found near the Radonjica lake could have been brought to the canal only from the KLA-controlled territory, the defense counsel argued that the Serbian military and paramilitary troops were deployed in the area. The prosecution's argument that the bodies belonged to the KLA victims is based on the false premise that the area was "under complete control of the KLA".

Furthermore, the defense counsel reminded the court of the fact that at the trials of Slobodan Milosevic and the Kosovo Six, the prosecution presented proof of the “manipulation and fabrication of evidence", the relocation of corpses and the use of Chinese ammunition in order to lay the blame for the crimes committed by the Serbian forces on the KLA. Some of the victims were actually last seen alive in the hands of the Serbian forces, Emerson said. In his view, it is impossible to draw any firm conclusions solely on the basis of the locations where the Serbian authorities found the alleged victims of the KLA, in light of the Serbian side’s propensity to “fabricate evidence”..

Emerson referred to the Lapusnik case judgment and its conclusion that the KLA did not implement the policy of attacks on civilians. The crimes the three former KLA commanders are charged with could not qualified as crimes against humanity, he contends. For crimes to be qualified as crimes against humanity, there have to be widespread and systematic attacks on civilians. The killing of 12 Serbs in western Kosovo over a 6-month period could not be characterized as either systematic or widespread, Emerson says.

Although at the pre-trial conference last week Haradinaj "reserved the right" to reply to the opening statement of Carla Del Ponte, today he did not use exercise his right to address the Chamber with a statement without taking the oath. The defense counsel of the other two accused, Idriz Balaj and Lahi Brahimaj, will present their opening statements at the beginning of the defense case.

Tomorrow afternoon, the prosecution will begin its case.