THERE WAS NO NEED TO FABRICATE ANYTHING

Unfinished Business, a documentary made by British journalist Jeremy Bowen is “pro-Muslim”, the defense of the six Herceg Bosna leaders on trial claims. “I did not want to show the good guys or the bad guys,” Bowen says, but to show how 60,000 people in East Mostar lived. “There was no need to fabricate anything,” he adds 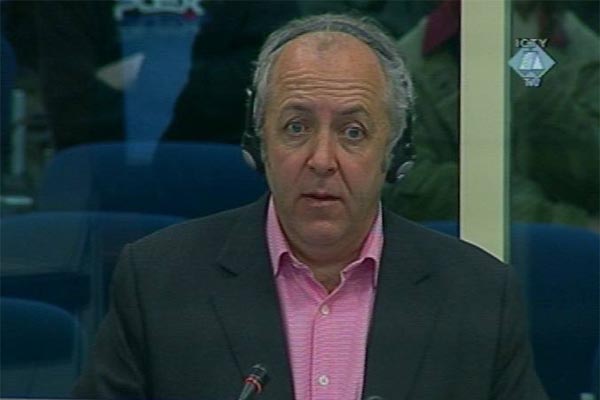 Jeremy Bowen, witness in the trial of the former Bosnian Croat leaders
The defense counsel representing the six former Herceg Bosna leaders continued the cross-examination of British journalist Jeremy Bowen, accusing him of “lack of professionalism”. They described Unfinished Business, his documentary about East Mostar as “pro-Muslim”.

Slobodan Praljak, the highest-ranking officer in the Bosnian Croat army at the time, now in the dock, claims that he “begged” the BBC team to come and film in West Mostar. For reasons unknown to him they did not do it, he now says. He personally signed the permission to “pass through all the check-points to the last HVO checkpoint at Buna”.

Praljak further claims that through his good offices several other reporters and relief workers had been granted access to HVO-controlled territory, and he fails to see why the BBC team would be barred from doing that.

Bowen's response to those accusations was that the permission, “although this might seem illogical to someone at this time”, allowed the BBC to pass through the HVO-held territory, but not to film there. He also thinks he did not portray the BH Army “in the best of lights”, since he showed Croat prisoners doing forces labor at the front lines.

"I did not want to portray one side as good guys and the other as bad guys,” Bowen says, explaining that his intention was to show reality – the life of 60,000 inhabitants of East Mostar. “There was no need to fabricate anything or to lie in order to do that,” he says.

Praljak asked the witness at one point whether his “friends in the BH Army”, as he called them, had told him that they had fourteen British mercenaries fighting on their side. They were paid in Croatian dinars. He asked Bowen to tell him, if he knew, whether the mercenaries had been sent to BH by the British Government or the English queen. Bowen replied that he had no knowledge of it. If it turned out to be true, he added, it would make a very interesting topic for a documentary, he said.

[IMAGE]2433[/IMAGE]The trial continued with the testimony of Jovan Rajkov, a new witness who spoke about the Mostar reality in 1993. He is an ethnic Serb, a surgeon who worked in the war hospital in East Mostar during the Croat-Muslim conflict.