TO FIGHT OR TO DIE

BBC reporter Jeremy Bowen is testifying at the trial of the six former Herceg Bosna leaders. In the fall of 1993, he made Unfinished Business, a documentary about East Mostar. At that time, about 60,000 people faced the choice: to fight or to die 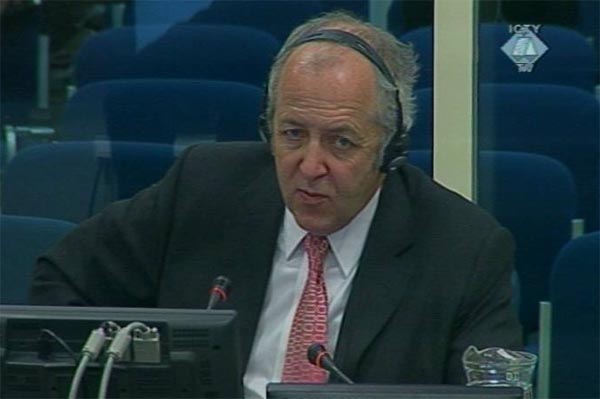 Jeremy Bowen, witness in the trial of the former Bosnian Croat leaders
Unfinished Business, a BBC documentary about East Mostar in the fall of 1993, was shown in an ICTY courtroom for the second time today. The first time was in November 2001, at the trial of Mladen Naletilic Tuta and Vinko Martinovic Stela. It was shown again today in the prosecution case against the six former Bosnian Croat leaders charged with the crimes committed in the Croat-Muslim conflict in Central Bosnia and Western Herzegovina, including the town of Mostar. The author of the film, Jeremy Bowen, was in the witness stand both times.

In the film, Bowen describes how about 60,000 inhabitants in East Mostar – most of them Muslims – face the choice: to fight or to die. The situation in East Mostar is described as worse than that in Gorazde, Sarajevo and Vukovar. Esad Humo, the BH Army commander in Mostar, was asked what he was fighting for. His answer to Bowen was, “for survival”.

The film shows the refugees expelled by the HVO from their homes in West Mostar crossing the Neretva river at night, under fire from infantry weapons. Bowen calls that “a war crime with a military objective” in the film. He interviews a rape victim, doctors in the Mostar war hospital, the mother of a wounded daughter who did not live to be evacuated in the first batch of the wounded, a daughter who has lost her father and a number of other civilians.

The film also talks about the practice of using Muslim prisoners as human shields on the front lines. On the other hand, it also shows the “newly-acquired” cruelty of BH Army soldiers, taking the Croat prisoners to do forced labor. A soldier explains that it was “the law of the jungle” in Mostar at the time.

Bowen says that the Croatian Defense Counsel was well-organized and that the HVO troops were “ready to follow the instructions” they received from their superiors. At the time it seemed to him that the HVO wanted to take the whole of Mostar and establish full control over the city, “with the support and at the instigation of the Croatian government”.

At the beginning of the cross-examination which will continue tomorrow, the defense counsel for Jadranko Prlic, Milivoj Petkovic and Bruno Stojic accused the British journalist of “bias” because he only showed one side of the Mostar story. As Bowen explained, before he started filming in East Mostar, his producer had spent several days in Medjugorje, trying to get permission from the Herceg Bosna officials to film in West Mostar, to no avail. The defense counsel did not accept the explanation proffered by the British journalist.

Bruno Stojic’s defense counsel accused Bowen of making a “facile and unfounded” accusation against the Croatian authorities about their “participation in the Bosnian Croat nationalist project” when he claimed that the siege of East Mostar was done “with the support and at the instigation of the Croatian government”. Bowen replied that he could not believe this claim “came as a surprise to anyone”, because it was a “notorious fact” at the time, and was openly discussed.

The accused Slobodan Praljak will cross-examine the British journalist tomorrow. The defense lawyers representing the remaining two accused – Valentin Coric and Berislav Pusic – ceded their cross-examination time to him.