David Harland, longest-serving UN official in BH, says that the objective of the artillery and sniper terror campaign against Sarajevo was to inflict the greatest possible suffering on the civilian population in order to force the Bosnian authorities to accept the Serb demands, while not pushing it too far in order not to risk an intervention by the international community 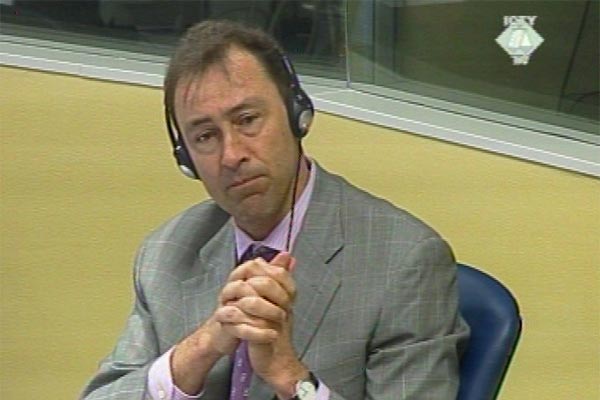 David Harland, witness in the Dragomir Milosevic trial
In the 44 months of the siege, the terror against Sarajevo and its residents varied in its intensity, but the purpose remained the same: to inflict the greatest possible suffering on the civilians in order to force the Bosnian authorities to accept the Serb demands, but without going too far, in order not to risk a harsh response or even intervention by the international community.

This is how New Zealander David Harland described the purpose of the artillery and sniper terror campaign in Sarajevo. He was the head of UN Civil Affairs in Bosnia and Herzegovina from May 1993 until the end of the war and for a while afterwards. Today he testified at the trial of Dragomir Milosevic, former commander of the VRS Sarajevo-Romanija Corps. Harland said today that the basic activity of the Corps was “to use the tools of terror [artillery and snipers] against the civilian population”. Harland met the accused general in 1994 and 1995 at various negotiations where cease-fire and the cessation of sniper activities were on the agenda. He described Milosevic as a “strong personality” and a “firm commander”, “stronger and firmer than his predecessor, General Galic”.

The indictment covers the period between August 1994 (when General Milosevic took over the command of the Sarajevo-Romanija Corps) until the end of the war in November 1995. Harland’s observation that the situation in Sarajevo deteriorated suddenly in late 1994 might therefore be relevant for the case. He went on to say that from that time on, the Serb forces increased the direct pressure by shelling and sniping attacks, cutting off power and water supply, blocking the humanitarian aid bound for Sarajevo and closing down the airport.

Since David Harland’s testimony at the Slobodan Milosevic trial was admitted into evidence, his examination-in-chief took a relatively short time. The prosecutor asked him to clarify some of the statements he had made the previous time and to confirm the authenticity of a number of UN documents which he either had drafted or had been acquainted with in some other way. Those were mostly documents on the artillery and sniper attacks the VRS launched on Sarajevo, a harsh humanitarian situation in the city caused by the lack of food, water and power, restrictions imposed on the freedom of movement of the UN representatives or UNPROFOR protests against cease-fire violations or violations of agreements on the cessation of sniper activities.

General Milosevic’s defense counsel Branislav Tapuskovic started his cross-examination with the well-known claim that according to the land registry, Serbs owned more than 65 percent of the BH territory. Harland replied that his Serb interlocutors would often pull this argument. His office “did a little enquiry”, determining that this was “manipulation and propaganda”. He reminded the court that Slobodan Milosevic had made a similar claim in 2003, during his cross-examination, and showed him an “ethnic map” of the greater Sarajevo area on which Igman and Bjelasnica were marked as “Serb property”. About 30 percent of the BH territory, Harland explained, is uninhabited and owned by the state, while in towns such as Sarajevo most of the property was socially owned. The claim that 65 percent of the territory was owned by Serbs is thus “inaccurate and misleading”, he says.

Judge Robinson interrupted the debate on this topic noting that “ownership of land is different from ownership of the territory, where the issue of sovereignty is raised”.