The defense counsel representing the six Serbian political, police and military leaders oppose the admission into evidence of the report by the KVM Human Rights Office. They claim the report is “biased”, adding that the researchers who had gathered the statements from about 2,800 victims and witnesses of the Kosovo crimes were “incompetent” 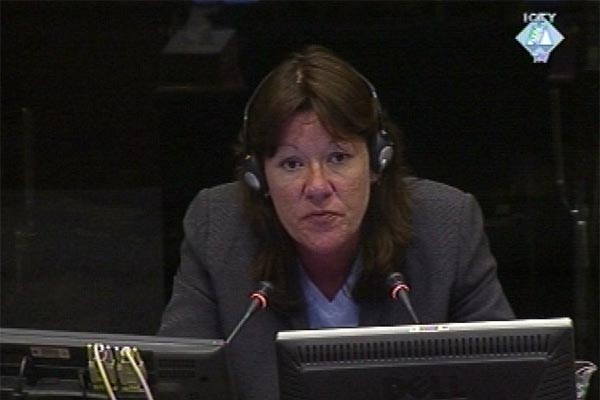 Sandra Mitchell, witness in the trial of the six former Serbian political, miltary and police officials
Today, the defense counsel representing the six accused Serb leaders cross-examined Sandra Mitchell, director of the Human Rights Office of the Kosovo Verification Mission (KVM). They tried to challenge the report made by the Mission staff on the basis of statements of about 2,800 refugees from Kosovo.

The defense counsel claim that the report, Kosovo – As Seen, As Told is “biased”, containing “anonymous testimony by alleged victims or witnesses of crimes” gathered by “incompetent” researches in refugee camps in Macedonia and Albania after the departure of the KVM staff from Kosovo on 20 March 1999.

None of the researchers, the defense claims, had any experience in interviewing witnesses. They were not familiar with the parameters used in statistical analysis. In the view of the defense, despite all that, they concluded on the basis of 2,764 statements that about a million refugees had left Kosovo in fear of the Yugoslav Army and the Serbian Interior Ministry (MUP) forces. The defense is trying to prove that the Kosovo Albanians fled Kosovo because of the Kosovo Liberation Army (KLA) and NATO air strikes.

The defense further contends that some statements by witnesses of crimes committed until June 1999 contained in the KVM report are identical to those published in the report of the International Crisis Group which also interviewed victims in refugee camps. Witness Sandra Mitchell denied the allegation that the Human Rights Office researchers forwarded the statements to anyone apart from the ICTY prosecutors, noting that it was possible that researchers “got the same stories from the same people”.

The presiding judge in the Chamber hearing the case against Milan Milutinovic, Nikola Sainovic, Dragoljub Ojdanic, Nebojsa Pavkovic, Vladimir Lazarevic an Sreten Lukic noted that identical statements could “affect the assessment of witnesses”, concluding that the Chamber will rule on the admissibility of the report tomorrow, after hearing all the arguments of the defense and prosecution.