VIEW FROM THE TOP OF THE "MILITARY SECURITY PYRAMID"

Slobodan Milosevic claims that Geza Farkas received all the information about what was happening in the country. He was the head of the Security Directorate in the Yugoslav Army during the conflict in Kosovo. Consequently, Milosevic contends that the things Farkas claims to have no knowledge of never happened 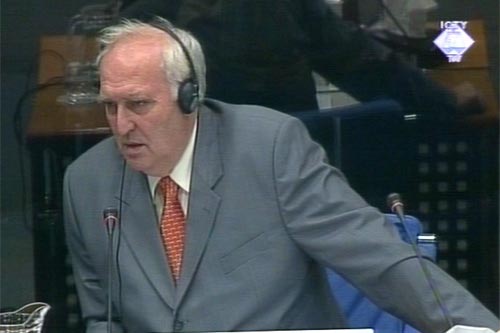 Geza Farkas, defense witness for Milosevic
Slobodan Milosevic presented his new witness, General Geza Farkas, as the man "at the top of the military security pyramid" during the conflict in Kosovo in 1999. All the information about the events in Kosovo flowed into his office, as he was the head of the Security Directorate of the Yugoslav Army. According to Milosevic, "he had to know if something happened or not".

The "something" Milosevic refers to are allegations about a "systematic terror campaign" implemented in Kosovo by the military and police, about mass deportations and forcible transfer of Kosovo Albanians, shelling, destruction and plunder of towns and villages and murder of a large number of civilians. Milosevic read out those allegations to General Farkas, and he replied to each and every one of them that he had "no knowledge" of such events. According to the accused, this proves that such things never happened.

General Farkas confirms that there were instances of plunder, arson, rape and murder of civilians in the spring of 1999 in Kosovo, but he claims those crimes were committed by "individuals" or "groups of two to three individuals at most". There were VJ soldiers and officers and Interior Ministry personnel among them. He also confirms there were paramilitaries in Kosovo. He mentions a man by the name of Boca Medic and some thirty "men who used to be in Arkan's units". He claims they were "part of the Interior Ministry units".

When the information about the crimes committed by "individuals" or "groups of individuals" reached the Security Directorate, General Farkas would report to Dragoljub Ojdanic, Chief of General Staff, who ordered him to go to Kosovo and investigate those reports. Farkas obeyed the order, went to Kosovo and submitted his report to Ojdanic upon his return to Belgrade. Ojdanic said he would immediately inform President Milosevic about everything.

When he was informed about those occurrences, Milosevic convened a meeting with the top military and police personnel. As Farkas testified, he angrily "demanded some explanations" and ordered that the issue "be resolved immediately and all perpetrators be brought to justice as soon as possible". Farkas claims that all those who committed crimes that had come to light were in fact prosecuted. As for those crimes that had not come to light, they could not be investigated or prosecuted after the military and the police withdrew from Kosovo in June 1999.

At the beginning of the cross-examination, prosecutor Nice asked the witness if he had any notes from the meetings with Milosevic or Ojdanic where the prevention of crimes in Kosovo and the punishment of perpetrators were discussed, or perhaps copies of the order dispatching him to Kosovo and the report he submitted to the Chief of General Staff. General Farkas replied he "did not take any notes" at meetings, that Ojdanic issued an "oral order" to him and that the report he submitted "probably exists somewhere". He, however, did not think he should bring it with him to The Hague.

The prosecutor wanted the witness – man "at the top of the military security pyramid" who received "all the information" – to explain how the bodies of hundreds of Kosovo Albanians who had been killed came to be moved from Kosovo to Batajnica. Farkas said he had learned about the moving of the bodies only after the war. At the time when it happened, he "had no knowledge of it".

The cross-examination of General Farkas will continue tomorrow.