CLEANSING: WHAT IS IT?

In the additional cross-examination, General Djosan explains that the term "cleansing", used often in his War Logbook, refers to "locating, capturing, eliminating and, in the final analysis, destroying terrorists… but in no event does it mean that the civilian population was targeted by such activities" 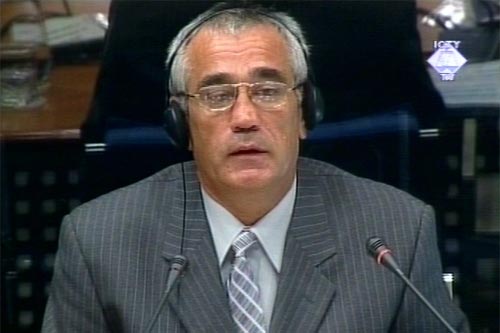 Djosan testified during the last two weeks. He came back to the courtroom today for additional cross-examination about the contents of the war logbooks produced by his brigade in 1999. They had been obtained by the associates of the accused Milosevic in the meantime.

During the conflict in Kosovo, General Djosan commanded the VJ 52nd Artillery Rocket Brigade. At the same time, he was the commander of the Djakovica garrison. Although this was an air defense brigade, its units – as noted in the War Logbook several times – took part in "cleansing operations" in certain villages or areas in Kosovo, between the end of March and early June of 1999. The logbook also records that Djosan's units "returned from cleansing… after a successful task". The prosecutor put it to the witness that those had been "ethnic cleansing" actions with the purpose of expelling the population, the Kosovo Albanians. The witness categorically denied the allegation.

"Cleansing", as General Djosan explained today, means "to separate something good from sometimes bad". The cleansing in which his units participated consisted of "separating the terrorists from the rest". When one "cleans the house," the witness added, "one doesn’t take out everything, just the trash". When the term "cleansing" is used in the War Logbook, it refers to "locating, capturing, eliminating and, in the final analysis, destroying terrorists… but in no event does it mean that the civilian population was targeted by such activities".

At the end of that part of the cross-examination, General Djosan allowed it was possible that the "term cleansing is an unfortunate choice of word". He added, however, that "the term was in general use and sometimes was used to make easier the drafting" of war logbooks and report.

In his examination-in-chief, General Djosan said the Yugoslav air force had not been active in the spring of 1999 because NATO had had absolute air supremacy, contradicting the testimony of some prosecution witnesses who had claimed that VJ planes had bombed the village of Nogavac on 1 and 2 April 1999, killing about a hundred people. The prosecutor found a note in general's War Logbook in the entry on 30 April, stating that his anti-aircraft defense unit had been ordered "not to open fire… because our aircraft were carrying out missions".

According to the prosecutor, "the mission" of the VJ aircraft at that time was "to bomb its own people". The witness contradicts the claim, noting that prosecutor Nice "doesn't know first thing about aircraft" – otherwise he would know that "aircraft refers to everything that flies". General Djosan says that every time it is stated in the logbook that the "aircraft are carrying out missions", this in fact referred to Medevac helicopters, evacuating the wounded soldiers and police officers.

Since the VJ aircraft did not carry out any combat missions at the time, according to General Djosan, the people who were killed by air strikes on 1 and 2 April were the victims of NATO bombs. The prosecutor wondered how such a serious incident, involving a hundred civilian casualties of the NATO air strikes had not been recorded in his war logbook. General Djosan explained to him that only actions targeting VJ units and facilities were recorded, not those targeting civilians.

After the cross-examination of General Djosan, Colonel Vlatko Vukovic resumed his testimony. He will remain in the witness stand tomorrow.