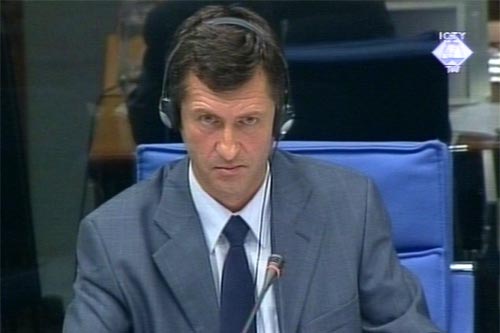 Vlatko Vukovic, defense witness for Milosevic
“There is nothing sadder than watch poor people leaving their homes on somebody’s orders,” Colonel Vlatko Vukovic, commander of the 2nd Battalion of the Yugoslav Army 549th Motorised Brigade, wrote in his war journal on 30 March 1999. The colonel made the entry after encountering a column of about 2,000 feeble refugees, mainly elderly men, women and children, heading down the Djakovica-Prizren road towards Albania.

In his testimony at the trial of Slobodan Milosevic, Colonel Vukovic said he had tried to persuade those people to go back to their homes, but they insisted on going to Albania. They explained to him that they feared NATO bombs and that “terrorists had ordered them to leave the village.” The colonel admitted “there were also those saying they feared attacks by the military,” but according to him, “the main reasons were NATO and the terrorists.”

The witness also offered his personal opinion about why refugees were fleeing Kosovo, and the judges agreed to hear it despite an objection from the prosecutor, who noticed that the colonel was not an expert and had no access to documents on the basis of which prosecution experts arrived at different conclusions regarding reasons for the departure of Kosovo Albanians.

In Colonel Vukovic’s personal opinion, behind everything was an attempt “to stage a humanitarian catastrophe which NATO would use as an excuse in the eyes of the public in alliance member states and neutral countries.” In addition, by encouraging the refugees to leave, NATO wanted “to clear the ground for indiscriminate bombings of all targets in Kosovo” which, according to him, ensued after 8 April 1999. It was for these reasons, in the personal opinion of Colonel Vukovic, that NATO bombed refugee columns that were trying to return to their villages. The colonel’s personal opinion otherwise fully corresponds to the allegations maintained by Slobodan Milosevic since the first day of his trial.

The judges were particularly interested in the entries he made in his war journal for 27 and 28 April 1999 when his unit took part in Operation Meja. According to the indictment, at that time “forces of the Federal Republic of Yugoslavia and Serbia” launched “a massive attack on the Albanian population in the Caragojs, Erenik and Trava valleys” and singled out a large number of men from a refugee convoy in Meja, 300 of whom are still presumed missing. The prosecutor alleges that the bodies of some of the people who disappeared at Meja were found in a mass grave at Batajnica.

Nothing of this, however, was recorded in the colonel’s war journal. On the contrary, something opposite was recorded, notably that on 27 April, at 0835 hours, “from a group of civilians, including children, fire was opened on soldiers deployed along the lines of the blockade” wounding two volunteers from the 1st Company of the colonel’s battalion. The war journal does not say what the colonel and other senior officers of the company did to identify and capture those who opened fire on the troops from the group of civilians.

This may be discussed in greater detail next week during the cross-examination of Colonel Vukovic.