In the continuation of the trial of the Vukovar Three, Dr Vesna Bosanac described her four meetings with “arrogant and strict” Major Veselin Sljivancanin. 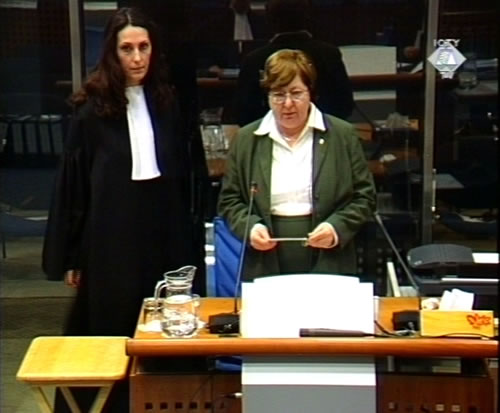 Vesna Bosanac, witness at the Slobodan Milosevic trial
Veselin Sljivancanin was “arrogant and strict,” Dr Vesna Bosanac said on the third day of a hearing in the trial of the Vukovar Three. The former security officer of Operational Group South made this impression on her after “an interview” they had at his headquarters in Negoslavci on 19 November 1991.

That evening, JNA (Yugoslav People’s Army) soldiers escorted Dr Bosanac from the hospital – where the evacuation of the wounded, sick and civilians was being prepared – to the Operational Group headquarters. Interrogating the doctor, Major Sljivancanin wanted to find out where Croatian troops and the commander in charge of Vukovar’s defence were hiding. He also asked her “who killed his young men, JNA soldiers” and “how much would Tudjman pay for her”. Doctor Bosanac replied, as she stated today, that she did not know who killed them or who brought them to destroy Vukovar.

Responding to questions put by Prosecutor Marks Moore, Vesna Bosanac said she had met Sljivancanin two more times that day. In the first of those meetings the major warned the doctor “not to meddle in what is not her business.” During the second meeting, in the presence of Nicholas Borsinger, a representative of the International Committee of the Red Cross, Sljivancanin asked her to give him lists with the names of 400 seriously and lightly wounded persons, insisting that all copies be delivered to him. Borsinger, according to the witness, was “frightened” and he admitted that he was “unable to influence the way in which the evacuation was being conducted.”

Vesna Bosanac saw Major Sljivancanin for the last time the following day in the hospital when he called the medical staff to tell them that the JNA “has liberated Vukovar” and that the hospital would be placed under the authority of the Army Medical Academy in Belgrade.

The prosecutor completed the examination-in-chief by introducing as evidence a list containing the names of more than 250 victims of the massacre at Ovcara, with whose deaths Mile Mrksic, Veselin Sljivancanin and Miroslav Radic are charged. Vesna Bosanac had previously marked which of the people on the list were civilians, wounded or Croatian soldiers.

The cross-examination of the first prosecution witness was opened by Mrksic’s defence counsel Miroslav Vasic, whose questions mainly concerned the start of fighting on the Vukovar front and events that preceded the town’s blockade. He was particularly interested in how the doctor calculated that between 80 and 90 shells fell on the hospital every day. Vesna Bosanac stood by that statement, saying that “that many shells certainly did fall on the hospital and even 100 times more fell on the town.” Evidently angered by the question, she advised the defence counsel to refer the question to his clients – Mrksic, Radic and Sljivancanin – since they “know it very well.”