MILITARY PRECISION OF THE OPERATION AT OVCARA IN VUKOVAR

In his opening statement at the trial of the Vukovar Three, the prosecutor notes that the selection of the people from the Vukovar hospital, their transportation, provisional detention, execution and burial in a mass grave were an "operation that required military precision". Sljivancanin and Radic deny any responsibility for the crime at Ovcara and put their trust in "truth and justice". The presentation of evidence will begin on 25 October 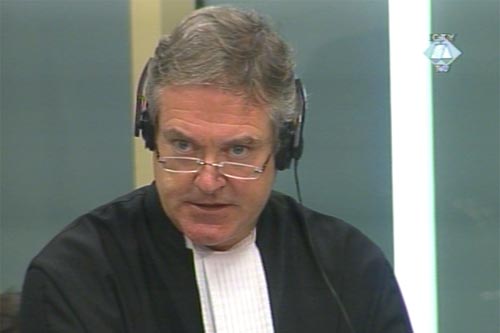 Marks Moore, prosecutor in the 'Vukovar three' case
The accused Mile Mrksic, Veselin Sljivancanin and Miroslav Radic "did not physically commit any crimes they have been charged with, but they did contribute to the implementation of a joint criminal enterprise," prosecutor Moore said in his opening statement at the trial of the three former JNA officers. According to the prosecutor, the plan was to "kill, bury and hide the bodies" of more than 200 Croats who had been taken away from the Vukovar hospital on 20 November 1991. The plan was implemented by the "use of forces under the command of the accused". Moore said that the prosecution would prove that the accused "knew what was going on and had effective control over their forces, yet did nothing to prevent the crimes or to punish their subordinates who committed them".

Fourteen years after the crime and ten years after the issuing of the indictment, the trial of the Vukovar Three finally began before the ICTY. The former JNA officers are charged with the massacre at Ovcara. In his opening statement, the prosecutor presented a general outline of the events from 18 to 20 November 1991, from the time the JNA entered the rubble of Vukovar to the negotiations and the agreement to evacuate the hospital, to the inability of the European monitors and the representatives of the International Red Cross to monitor the implementation of the agreement, the sorting of the sick, wounded and civilians in the hospital yard, the departure of the buses with selected Croats on board to the yard of the JNA barracks and then on to Ovcara, the maltreatment of the prisoners in the hangar there and their eventual execution and burial. According to the prosecutor, because so many people had to be executed and buried, this was "an operation which required military precision".

Regarding the roles of each of the accused in those events, the prosecutor said that Mrksic commanded the Operational Group South, responsible for the evacuation of the hospital. In addition to the 1st Guards Brigade, he commanded the Territorial Defense units and the volunteers from Serbia. Sljivancanin was the security officer. As such, he was subordinate to Mrksic and superior to Radic, whom he considered to be his right hand. Radic commanded one of the "assault groups". It included the JNA soldiers, volunteers from Serbia and local Territorial Defense units, Leva supoderica and Petrova gora. According to the prosecutor, they were the direct perpetrators of the crime in Ovcara.

The prosecutor contends that the accused could have "foreseen that something like that would happen". Because of the heavy fighting and the heavy toll, and a lot of hate, there was concern that there could be reprisals and that people could take revenge on the prisoners of war and civilians. The then Chief of General Staff, Zivota Panic issued an order on 18 November 1991, specifically stating that the commanders at all levels will be held personally responsible for the compliance with the Geneva Conventions on prisoners of war, in order to prevent reprisals and revenge. Sljivancanin and Radic were aware of what would happen with the people from the Vukovar hospital, the prosecutor claims, corroborating his claim with the testimony of two witnesses: a woman to whom Sljivancanin said that "darkness will swallow those men in broad daylight" and a reporter who was told by Radic that "these are all dead men".

The defense counsel for the three accused announced they would present their opening statements at the beginning of the defense case. Sljivancanin and Radic addressed the judges without an oath. They both denied any responsibility for the crime at Ovcara, expressing their hopes that the "real truth" will come out at the trial. In his twenty minutes, Sljivancanin said that the crime "was committed by those who hated the JNA and prevented it in its efforts to preserve Yugoslavia".

The presentation of the evidence at the Vukovar Three trial will start on 25 October, when the first prosecution witness is set to take the stand – that will be Dr. Vesna Bosanac, head of the Vukovar hospital.