The defense counsel for the Vukovar Three claim that after the JNA entered Vukovar, members of the National Guard Corps (ZNG) took shelter in the hospital, disguised as doctors or put on bandages and splints to look as if they had been wounded. Nurse Binazija Kolesar finds it "hard to believe", although she cannot deny with certainty that there were no such cases 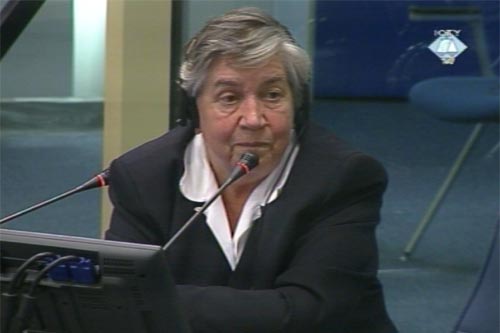 Binazija Kolesar, witness in the trial of the 'Vukovar three'
In their cross-examination of Binazija Kolesar, the defense counsel for Mile Mrksic, Veselin Sljivancanin and Miroslav Radic claimed that when the JNA entered Vukovar, members of the National Guard Corps took shelter in the hospital, disguised as doctors or put on bandages and splints to look as if they had been wounded. The prosecution witness, who was the head nurse in the Vukovar Hospital surgical ward in November 1991, did not confirm or deny those claims.

She added that she did "not find it strange that people should strive to get the status of the wounded" because "they knew the wounded were protected by international conventions". She also noted that "no one could turn himself into a wounded man, put on a splint and write down his findings" just like that. "Everyone had to undergo an examination" and records were kept.

According to the witness, ZNG members did not wear white coats reserved "for persons assigned to assist with the transportation of the wounded". Although she found it hard to believe, Binazija Kolesar admits she cannot rule out the possibility that some "Zengas" did in fact put on white coats because, as she says, "it was difficult to guess in the mass of people who could wear a white coat".

Quoting a statement the witness gave to OTP investigators ten years ago, the defense counsel tried to show that before the outbreak of the conflict the Serb civilians had bee afraid to seek medical help in the Vukovar hospital and that those who had done so had been mistreated.

In her 1995 statement, the witness said that from the clash in Borovo selo in May 1991, "the hospital treated the wounded who were guarded by armed police, while the Serb patients stopped coming because they were afraid". She now corrected her statement, saying that the patients could not get to the hospital because of the road-blocks around Vukovar. She allowed that the Serbs had been "afraid of the police officers" guarding their colleagues who had been wounded in Borovo selo. She thinks it "not very likely that the police officers were armed while in hospital".

The defense also claims that the wounded JNA soldiers did not receive adequate treatment in the hospital and that they were held there "as hostages", to be paraded before the international monitors. The defense tried to prove that with the case of Sasa Jovic, a wounded JNA soldiers, whose wounds had not been serious enough to warrant a hospitalization longer than a month, as they claim. "I've never heard of something like that," the witness said, adding that she did not know anything about the nature of his wounds. She mentioned the case of Private Trifunovic, who had been found by the ZNG in an abandoned house. He was seriously wounded and had been lying there for two days. They took him to hospital where the medical staff determined his wound had got infected and that there was no choice. His leg had to be amputated, the witness explained.

The prosecution had no additional questions for Binazija Kolesar. The Vukovar Three trial will continue this afternoon with the testimony of a protected witness.