Miroslav Radic's defense lawyer accused Dr. Vesna Bosanac of misrepresenting the situation in the hospital and the town to the international community in the appeals she was sending to its representatives, all this in collusion with the Vukovar defense commanders. The question is: did Dr. Bosanac state to the OTP investigators that something had happened "in November" or "by November" 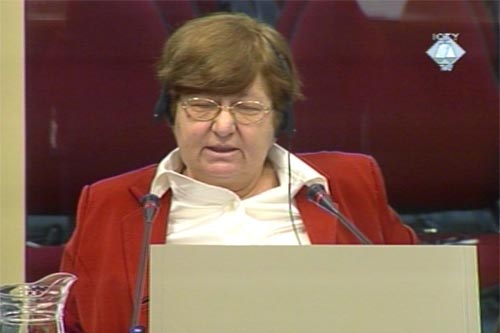 Vesna Bosanac, witness in the trial of the 'Vukovar three'
In his harsh cross-examination of the first prosecution witness, Miroslav Radic's defense counsel made a claim that throughout the conflict in the Vukovar theatre Dr. Vesna Bosanac had been collaborating with the members of the National Guard Corps and the local police. To corroborate his claim, Belgrade attorney Borivoje Borovic says the appeals to the international community, calling for a stop to the shelling of Vukovar and an urgent evacuation of the town hospital were not in fact written by Dr. Bosanac, but by the Croatia police officers and soldiers.

Radic's defense counsel tried to substantiate the claim by referring to one of those documents, written on 22 October 1991, stating that three JNA soldiers were admitted into hospital on that day. He noted that this information differed from what Dr. Bosanac had said in her statement to the OTP investigators in July 1995. There it says the soldiers were admitted into hospital in November. The witness protested against this claim, explaining that the date was wrong. She claims that in her statement to the investigators, speaking about the date of admission of the soldiers, she didn’t say "in November" but "by November".

Prosecutor Marks Moore joined Judge Kevin Parker, Borovic and Dr. Bosanac in the heated debate, noting that the solution to the problem may lay in the fact that one of the versions of the statement in question was made in Croatian, and the other in Serbian. "I thought it was the same language, but who am I to judge," the prosecutor said, appearing rather confused. The issue was finally resolved when Judge Parker recommended that the original of the 1995 statement be found.

As the cross-examination continued, Radic's defense tried to impeach the prosecution witness. The defense claims Dr. Vesna Bosanac had been investigated by military authorities in Serbia, under suspicion that she herself had committed a war crime by refusing to treat an injured JNA soldier.

During the cross-examination, defense counsel Borovic accused Dr. Bosanac of being "inhumane", of having "held the wounded and the sick as hostages" in the hospital while she herself slept at home every night in her "cozy bed", as he put it, and drove around town in her car, consuming petrol that should have been saved for the hospital power generator. The witness replied that the car uses petrol while power generators use diesel fuel, and that "there were no cozy beds in Vukovar at that time, when the town was being shelled every day", forcing the population to live in basements and shelters.

The cross-examination of Dr. Bosanac will continue on Monday by Novak Lukic, Veselin Sljivancanin's defense counsel.