Former police chief from Urosevac confirms the authenticity of several dozen documents originating from the Serbian State Security Service and Interior Ministry about the organization, membership and activities of the Kosovo Liberation Army in the Urosevac and Stimlje area 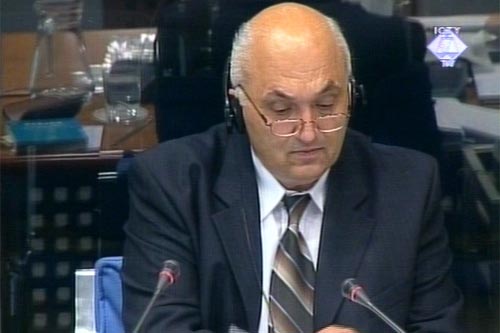 Bogoljub Janicevic, defense witness for Milosevic
As Bogoljub Janicevic, former police chief in Urosevac, continued his testimony, Slobodan Milosevic tendered into evidence several dozen official records of so-called preliminary interviews, witness statements and records of interrogation of Kosovo Albanians under arrest. They speak about the organization, membership and activities of the Kosovo Liberation Army in the Urosevac and Stimlje area. This area includes the village of Racak. According to the witness, that village had “a substantial terrorist presence”. The terrorists were commanded by a man named Afet Bilali, nicknamed Copa.

As the police and security service documents indicate, the 161st KLA Brigade was operating in the Urosevac and Stimlje area. It included the “village brigades” with the “sub-staffs” in Racak and other villages in the area. Janicevic confirmed the authenticity of the documents as the competent “official”. He claims that the police and state security service “had information about the establishment of the KLA brigades even before they were actually established.”

In his testimony today, Janicevic did not reach the incident in Racak on 15 January 1999. Some charges in the indictment against Slobodan Milosevic relate to that incident. He started from March 1991, when, as he explained, he “personally participated in the suppression of the hostile protests” by Kosovo Albanians. From there, he went on to the rapes, murders and desecration of Orthodox graves in the eighties. According to Milosevic, those occurrences indicate that there was “a continuity of violence against Serbs”. When the judges insisted, he finally addressed the events in late nineties, without actually coming to the period relevant for the indictment.

Bogoljub Janicevic’s testimony will continue next Wednesday. Before he continues, General Bozidar Delic is set to take the witness stand again for a short while, to face additional cross-examination. The prosecutor, as he announced today, will confront the witness with a new statement made by Lord Ashdown about where he actually was and what he saw in 1998. The prosecution will also show a video tape made last summer on the locations where Ashdown, as he claims, watched the Serb forces attack the Albanian villages south of Junik. General Delic stated categorically that Ashdown could not have seen that from the position where he was.