How did Dragan Jasovic start out as the prosecution "witness of truth" in the Lapusnik case, only to become a "liar, thug and accomplice in the cover-up" of the crime in Racak? 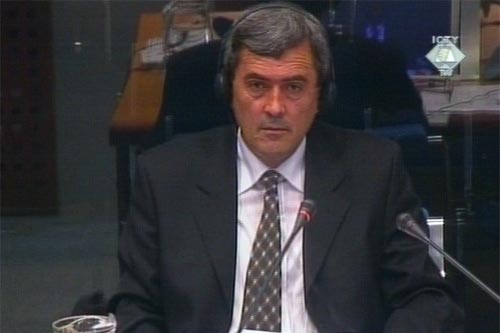 Dragan Jasovic, witness in the Milosevic trial
Slobodan Milosevic began the process of rehabilitating Dragan Jasovic in his re-direct examination in what is the weak point for the prosecution in the case of this witness. Milosevic is not the only one to have identified it. He reminded the court that in March this year the prosecution called Jasovic to testify in the trial of three KLA members accused for the crimes in Lapusnik, presenting him as a "witness of truth". Now, however, the prosecution is challenging Jasovic’s credibility and is trying to present him as a liar, a police thug and accomplice in the cover-up of the crime the prosecution alleges was committed in Racak on 15 January 1999. In Milosevic's view, prosecutor Nice "switched sides" and is now siding with the defense counsel for Limaj, Musliu and Bala in efforts to impeach the former police inspector from Urosevac.

Just as in his cross-examination the prosecutor used police documents produced by Jasovic and other defense witnesses to support the allegations about the Racak crime, so did Milosevic tried to rehabilitate his version of the events in Racak by quoting prosecution witnesses and documents.

Milosevic again referred to the testimony of Shukri Buja, former KLA commander in the zone which included Racak. In his testimony as a prosecution witness he said that the "KLA opened fire first." This is more or less the only thing Milosevic accepts as credible in Buja's testimony. He contests everything else, including Buja's clarification that this was a "burst fired to warn" the KLA troops stationed in the trenches and bunkers around Racak.

According to Shukri Buja, there were 47 KLA members in Racak in the early morning on 15 January 1999. Nine were killed at the very beginning of the sudden attack. The others retreated soon after, taking the bodies of their fallen comrades with them. According to Milosevic, the number of "terrorists" was far greater and all the Racak victims were KLA members killed in the fighting. Of the 40 victims whose names are listed in an appendix to the indictment, as many as thirty are named as "members of the so-called KLA" in the statements that Jasovic maintains were given voluntarily by some Kosovo Albanians. Jasovic claims that some Albanians came to see him to complain that their sons had "joined the so-called KLA."

Milosevic also used the book entitled "The Fallen Heroes" to corroborate his version of the Racak incident. The book lists the names of KLA fighters that were killed. It was disclosed to him by the prosecution. Among the "fallen heroes," Milosevic was able to find 20 names of the persons who are listed as having been killed in Racak in 1999. Only three persons listed in the appendix and nine names mentioned by Shukri Buja in his testimony are among those names.

Milosevic will continue his re-direct examination of Inspector Jasovic tomorrow.