While the prosecution is trying to prove that Momcilo Krajisnik fostered the establishment of the Serb police in BH in order to achieve ethnic division, the accused claims that "entity police" enjoyed support both of the international community and the Bosniaks 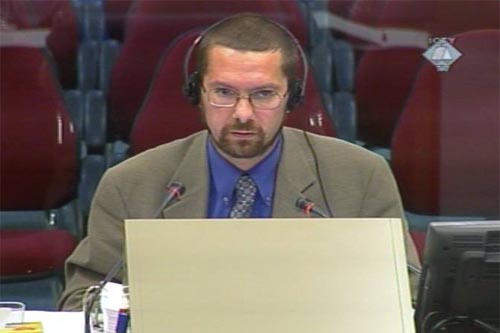 Christian Nielsen, witness in the Krajisnik trial
All international peace plans for BH envisaged the existence of entity police forces, the accused Momcilo Krajisnik put it to witness Christian Nielsen, former OTP investigator today. Nielsen had testified that the Bosnian Serb leadership had set up its own police force in 1992 in order to take and hold the "Serb" territories in BH.

Nielsen agrees that "there were plans to establish police forces below state level," but he claims that the Bosniaks never accepted that. Krajisnik – who has been granted provisional right to put questions to the witnesses after his lawyers – then said that "Muslims never opposed the idea of the police belonging to the entities in any of the peace plans." The judges then reminded him that the witness had said the opposite several times.

In his examination-in-chief, Nielsen testified that at a session of the Bosnian Serb Assembly in March 1992 Krajisnik had urged the "Serbian BH" to establish as soon as possible its own MUP, military, payments systems and to take the Serbian territories.

Krajisnik's defense counsel Chrissa Loukas tried to show during her cross-examination of the witness today that in fact Krajisnik had been trying to curb the extremist deputies at the Assembly sessions and to impose some discipline in the proceedings. Loukas notes that there was a "crucial difference" between Krajisnik, and for instance, deputy Vjestica from Bosanska Krupa, who opposed the peace talks that were going on at the time. According to Nielsen, however, the Assembly minutes indicate that "they may have disagreed about the methodology for the establishment of the Serbian police, but they agreed that a Serbian MUP must be set up in order to establish control of the territory."