Ramiz Delalic aka Celo said in the continuation of his testimony that Sefer Halilovic had not only failed to investigate the crimes committed in Grabovica but had also ignored orders from his superiors to do so. The defense tried to challenge his credibility, saying that Delalic had lied in other courts. 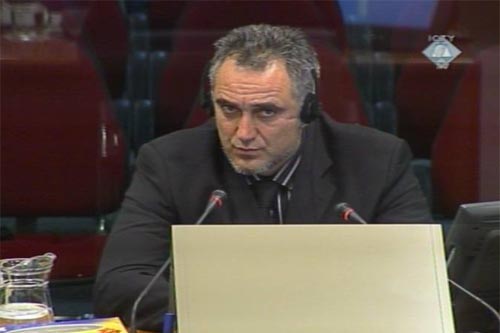 Ramiz Delalic, witness in the Halilovic trial
On the second day of his testimony in the trial of Sefer Halilovic, prosecution witness Ramiz Delalic aka Celo claimed that the accused had known about the crimes committed in Grabovica but had not investigated them despite orders from his superiors in Sarajevo to do so. Delalic reiterated that he had tried to help two boys whose family had been killed in Grabovica, but that he had not been given permission by his superiors.

According to his testimony, the day after 33 Croatian civilians were killed in Grabovica, Sefer Halilovic and Zulfikar Alispago ordered that a checkpoint be set up at the entrance to the village to prevent anyone from seeing what had happened. “There was no mention of arrests,” Celo said. “If they had wanted to arrest anyone, it would have been easy. Anyone who says they did something about it is lying!”

Delalic returned to the Forward Command Post for Operation Neretva ’93 in Jablanica shortly before his troops went back to Sarajevo and he attended a review of the units under the command of Sefer Halilovic. “Sefer told the soldiers to beware of the possibility of being arrested in the tunnel leading to Sarajevo. He said that the dirty laundry should be covered,” Celo said. He, Sefer Halilovic and a large number of members of the units that took part in Operation Neretva ’93 were arrested at the end of October as part of Operation Trebevic 2. Delalic thinks he was arrested because of his support for Sefer Halilovic. Delalic said he had broken his good relations with Halilovic in 1996.

During the cross-examination, Halilovic’s defense counsel Peter Morrissey drew attention to the unreliability of statements made by the witness and the possibility that Delalic could be under investigation in connection with the Grabovica case, which is not yet closed. “The witness is intelligent and very well informed of what kind of evidence exists against him,” Morrissey said.

The defense counsel reminded Delalic of allegations in the Grabovica indictment that it was he who “ordered that the dead bodies be concealed” and that soldiers from “the Ninth Motorized Brigade and the Tenth Motorized Brigade buried and burned some of the dead bodies”. Delalic denied all this. The defense expressed their doubt about the credibility of Delalic’s testimony regarding two boys from Grabovica, saying that it did not match their testimonies before the Tribunal. Delalic nevertheless stood by his statement. The defense also questioned the credibility of the part of Delalic’s testimony about the role of journalist Sefko Hodzic, who allegedly worked for the interests of Sefer Halilovic. “You are deliberately smearing Hodzic, because you know that his testimony can be harmful to you,” suggested defense counsel Morrissey, which Delalic also denied. The defense counsel went on to say that Delalic had previously lied in court in Sarajevo.