CONGRATULATIONS FROM THE "TUNNELLING COMMITTEE"

At the tenth anniversary of the UN Detention Unit in The Hague, its commanding officer, Timothy McFadden, speaks for SENSE about how the detainees are doing their best to make each other's lives more pleasant, and rejects complaints about the food and health care in the DU and allegations that the war crimes indictees enjoy any special privileges 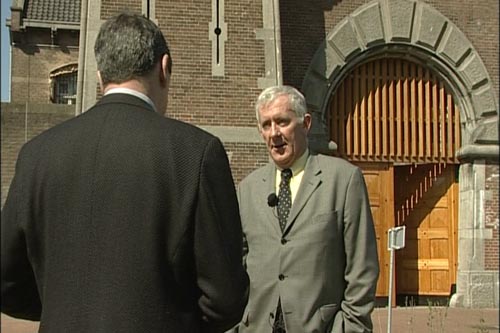 Timothy Mcfadden speaking to the SENSE director, Mirko Klarin
Timothy McFadden gained his first experience as a prison warden in the turbulent seventies in Ireland, mostly, as he says, "with politically oriented prisoners". In the early nineties, he left the Irish Army and started to work for the UN. In 1995, he was sent to Arusha with the task of setting up the detention unit for the ICTR. After he completed that task, McFadden was transferred to The Hague, to the post of the commanding officer of the UN Detention Unit of the ICTY.

When he arrived in The Hague on 1 July 1997, McFadden found only six accused in the Detention Unit, a modern facility which had 24 cells providing a reasonable level of comfort. The “senior” indictee was Dusko Tadic from Kozarac near Prijedor. He had been surrendered by the German authorities to the Tribunal exactly ten years ago– in late April 1995. For almost a year, Tadic was the only tenant in the Detention Unit. In the spring of 1996, he was joined by Zejnil Delalic, Zdravko Mucic, Hazim Delic, Esad Landzo and Drazen Erdemovic.

Since then, the Detention Unit has been constantly expanding, with new accused and new cells being added. McFadden now takes care of 62 detainees. There would have been even more of them, had 19 of them not been provisionally released pending trial and 30 transferred to prisons in other countries where they are serving – or in some cases, have already served – the sentences imposed by the Tribunal.

In his previous experience as a prison warden in Ireland, escape bids by "politically oriented prisoners were an important factor" McFadden says. Although, as he says, it is something he is very aware of and does not ignore, McFadden does not believe his current wards are contemplating escape.

"In all my consideration I have never seen any evidence of any escape intent or plans. I did get a very funny Christmas card one year from all of the detainees and underneath their names it was signed: The tunneling committee. That was a joke between them and I, but other than that I don't think it is a major factor. However I keep it in my mind at all times."

McFadden agrees that lack of evidence of any escape plans within the Detention Unit does not mean that someone on the outside is not plotting to help a prisoner escape.

“We are not foolish in that, it is not that we don't keep it under consideration and keep gathering information that might indicate such a plan was being formulated. We have never had any positive indications that such were the case. We will continue gathering information and be very much aware of it. We can control what is inside. What is outside we don't really know about, except gathering information here and there. And we continue to do that. There is an awareness on our part at all times."

With the exception of two or three generally known "troublesome cases" who "make life interesting", other detainees "try to make life in detention as pleasant as possible for everybody", McFadden explains.

"These gentlemen are all facing the same tribunal, they have a common problem in that they all face the same judicial process, albeit for different reasons. They have to live in a community here, that is the nature of prison life as such. They clearly understand that they can make it difficult for themselves by causing friction among themselves or they can make it reasonably pleasant and acceptable for themselves by cooperating with one another."

Goran Jelisic – sentenced to 40 years in prison for murders he had committed in Brcko – said at one point that the detainees have "reached peace with one another, but they are all very concerned if the people back home would do the same." McFadden does not see any "animosity that is generated by the history, events of the war, I don't’ see that overtly." Sometimes, he does see "personality clashes”: “Indeed they would be confined to the same ethnic group, people just don’t get on with one another." In the past 10 years, there have been only two minor, "ethnically clean" incidents - involving members of the same ethnic groups.

The multi-ethnic character of the Detention Unit community is not cause for conflict but for frequent feasts.

" It seems that in the Balkans you can make an excuse every day to have a party. Instead of having Christmas and Easter you have two Christmases, two Easters, just in case that is not enough, you have the various Muslim festivals, you have saints' days, birthdays, your father's days… they celebrate every one of these."

One of the most frequent complains McFadden's inmates make concerns the diet which, as General Dragoljub Ojdanic once complained to the judges, "does not suit our culture and tradition."

"Food is something that is certainly different," McFadden admits. "We don't’ have the wonderful train of meze coming past on the train on the table. It’s not that kind of food. It is different food, but it is healthy and substantial food. They have developed the capacity to order supplies that enable them to prepare the food that they like. This they do and they do it very well."

McFadden also does not consider any complaints the detainees make from time to time about the health care justified. He has an explanation for that:

“It is something that always occupies the mind of someone who is detained, because time is big enemy when you are in detention and if you have a minor element it becomes enlarged, it becomes the focus of your attention at all times. If you had that same minor element and you are carrying on with your normal daily life and freedom you’d say, 'I’ll have to wait until next week because I am too busy to go to see the doctor.' But they want to see the doctor yesterday when they have complaints. They get excellent healthcare, we have access to all major specialties in the major hospitals here in The Hague."

The UNDU Commanding Officer rejects the criticism about the privileged treatment of his wards and the conditions of detention which are, in some ways, better than the living conditions of many people in the countries where they comes from.

"We are running this unit in line and to comply with international human rights standards for the treatment of prisoners. And I don't believe for one moment that it could be described as pleasant to be an inmate in the unit. It is after all a custodial institution. These people have had their freedom denied, some are there for a very long time. Are they entitled to live a normal enough life in that situation or do people think they should be tortured? I certainly don't think so. There are people who have passed through this institution who were there because they ran similar institution and did not comply with these minimum requirement for the treatment of prisoners." 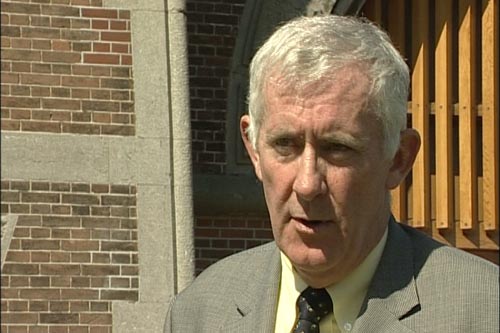