TO BE OR NOT TO BE FOR REPUBLIKA SRPSKA

The continued freedom of Radovan Karadzic and Ratko Mladic is a threat to the survival of Republika Srpska. Kalinic denies any contacts with Karadzic, claiming he would report him to the RS police if he knew where he was hiding. He invites the accused to surrender for Republika Srpska\'s survival. 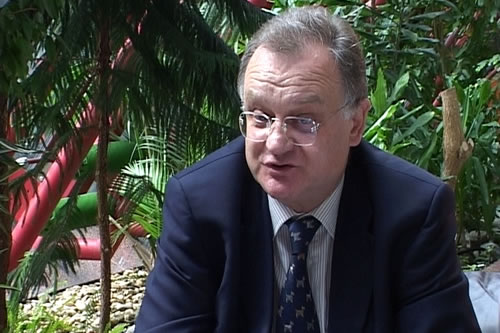 Dragan Kalinic, president of Rebublika Srpska parlament
The arrest of Radovan Karadzic and Ratko Mladic is "a question of 'to be or not to be' for Republika Srpska," says Dragan Kalinic, adding that he knows "for sure that this time the international community is dead earnest and that – if this key requirement is not met – everything about Republika Srpska will be brought into question."

In his view, there is nothing strange about this. "It's quite normal that they are calling for the arrest of Karadzic and Mladic, because it is an international obligation that Republika Srpska has, and if you want to be part of that international community, you have to meet that obligation.”

In an exclusive interview for the Tribunal TV program and a documentary about Karadzic and Mladic (a SENSE production), the Speaker of the RS National Assembly and leader of the SDS expresses his concerns that – if BH is not admitted to the Partnership for Peace program at the NATO summit in Istanbul – "a process of delegalization and delegitimization of Republika Srpska" could begin. As he says, this would be "precisely because of the fact that these two men have failed to surrender voluntarily and have not been arrested, because this raises the question whether the RS institutions and the local authorities are able to do it." That is why, he fears, "everything in Republika Srpska will be brought into question" after the Istanbul summit. Kalinic says that it's not the case that he and the current leadership in Banja Luka "don't care about that, and there is no price too high for the survival of RS as part of BH and as part of what we got through the Dayton Accords.”

If Karadzic managed to maintain any influence over the Serbian Democratic Party and state authorities in Republika Srpska after his withdrawal from political and public life in 1997, this is no longer the case with the "reformed party" of today, Kalinic categorically claims.

“What I can state with full certainty is that neither he nor any other person from the former SDS leadership has any influence whatsoever on current SDS policies," Kalinic says, and points to the recently published letters ostensibly written by Radovan Karadzic to his wife. Kalinic notes that these letters "show that he is focusing on other issues, family issues, life issues, making just a few remarks, in a sentence or two, in passing, about what the current batch of politicians are doing, labeling them as people who agree to too many compromises and concessions."

Kalinic claims to have last seen Karadzic "a long time ago," in 1997 or perhaps even in 1996. He rejects claims that he has secret contacts with him to this day as "completely untrue."

“I read many things in the papers: about meetings I have allegedly had with him, how I am helping him travel from Serbia to BH and vice versa, and how I am receiving instructions from him about SDS policies. I think this is the product of a fertile imagination. To all that I can ask: If that is indeed the case, why haven't you done the job yet? If you can't find Karadzic and you know where I go, then by following me and my contacts you can reach Karadzic.”

The current SDS leader claims that in the past five years, he has had no information about where his predecessor is hiding. There is no dilemma, however, as to what he would do if he were to learn about his whereabouts today.

Reminding us that the Republika Srpska leadership has called innumerable times for the accused to surrender voluntarily, Kalinic notes that this would avoid putting the survival of the entity as a product of the Dayton Accords at risk. In his view, one could ask a "logical question": Would the voluntary surrender of Karadzic and Mladic "help the survival of Republika Srpska … now that it is practically before the wall, facing great challenges, and when it is possible that it may survive only as a territorial concept?" He adds that he is "not saying that fortuitously," but that "the citizens he meets think along the same lines."

Kalinic wants to believe that Radovan Karadzic and Ratko Mladic are aware of the fact that their continued efforts to flee international justice pose a serious threat to the entity they helped create.

Kalinic claims that it is the least of his worries whether after the Istanbul summit he will be personally punished or replaced, because the RS authorities have not fulfilled their obligation under international law to arrest those accused of war crimes, which is why BH has been denied membership in the Partnership for Peace program.

“None of us can put ourselves before the necessity to defend before this people that which we care about the most, and that is Republika Srpska. We do not have any better guarantee for our equality, for the stability of Bosnia and Herzegovina, than the existence of Republika Srpska.”