Former Macedonian interior minister thinks that “in his case there is no case” and pleads “absolutely innocent” with regard to the accusations of murder, wanton destruction and cruel treatment of Albanian civilians in the village of Ljuboten 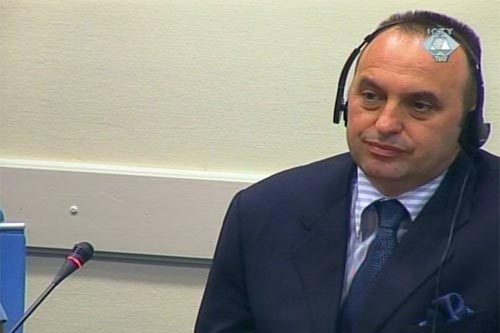 Ljube Boskoski in the courtroom
Former Macedonian interior minister Ljube Boskoski stated today he felt “absolutely innocent” with regard to the accusations levied at him by the ICTY. He had his initial appearance before a judge to enter his plea on the counts of the indictment, a week after his transfer from detention in Croatian to the UN Detention Unit.

Boskoski represented himself today, stating that he had not yet sorted out all the “details” about the appointment of defense counsel. Nevertheless, he said he was be ready to enter his plea since he considered that “in his case there is no case.”

He has been charged, together with Johan Tarculovski, commander of the special unit of the Macedonian MUP, with unlawful attacks on civilians and civilian objects, on 10 and 12 August 2001 in the village of Ljuboten near Skopje. Boskoski and Tarculovski are charged in three counts of the indictment with murder, wanton destruction and cruel treatment, qualified as violations of laws and customs of war. Last week, Tarculovski postponed entering his plea on the counts by 30 days.

Boskoski, on the other hand, states that he feels “absolutely innocent”, adding that the “way in which the investigation was conducted” in his case is tantamount to an “anti-Macedonian act.” He considers that the allegations against him have been copied from a report by the Human Rights Watch organization and that this is not “a case against Ljube Boskoski, but against the Republic of Macedonia.” Judge Kevin Parker replied that the “sentiments expressed” by the accused “have been noted” and informed him that he would soon receive the supporting material for the indictment.

The indictment alleges that on 10 August 2001, a Macedonian military vehicle came upon a mine laid by the members of the so-called National Liberation Army (NLA) of the Macedonian Albanians. Eight Macedonian soldiers died in the explosion. The same day, the Macedonian military opened fire on Ljuboten, firing at least two shells which killed two civilians, one of them a five-year-old child.

Two days later, on Sunday, 12 August 2001, a special unit of the Macedonian police entered Ljuboten. It was organized and led by Johan Tarculovski, the indictment alleges. Three incidents are described in it, in which seven Albanian civilians were killed. Fourteen houses were burned and severely damaged in the course of the attack. Members of the unit led by Tarculovski arrested more that a hundred Albanian civilians, men, and subjected them to systematic beatings and humiliation.