DOES THE SERBIAN SECURITY SERVICE “PREP” WITNESSES TESTIFYING IN THE HAGUE?

A failed attempt to present the Lapusnik camp case as a “frame-up” by the Serbian secret service. Three former KLA members are accused of the crimes in the camp 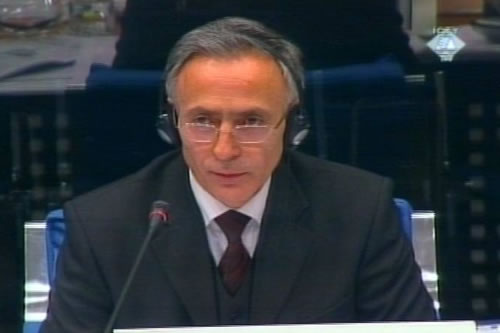 Jakup Krasniqi, unwilling witness in the KLA trial
Kosovo politician Jakup Krasniqi and British lawyer Michael Topolski tried to persuade the Tribunal today that the Lapusnik camp case was a “frame-up” on the part of the Serbian secret service and that some of the Kosovo Albanians testifying in The Hague as prosecution witnesses “could be under its influence.”

Last Friday, at the beginning of his testimony at the trial of Fatmir Limaj, Isak Musliu and Haradin Bala, Krasniqi said that the indictment against the three former KLA members was “politically motivated” and based on evidence given by “people in the service of the Serbian occupiers in Kosovo.” Reminding him of his statement today, Topolski – defense counsel for Isak Musliu – asked Krasniqi whether he claims that some of the prosecution witnesses had been “prepped by the Serbian secret service” before testifying in The Hague. Krasniqi, who used to be member of the KLA Main Staff and was its spokesperson, confirmed that and said that he could present “new facts”. The court then went into private session.

After a brief private session, prosecutor Alex Whiting expressed his concern that the public might draw wrong conclusions, and asked that it be stated publicly that during the private session, the witness did not provide any evidence to support his claims about the involvement of the Serbian security service in the Lapusnik case. He also demanded that everything that was said in private session be made public.

Presiding Judge Kevin Parker agreed with the prosecutor about the nature of Krasniqi’s evidence and ordered that everything that was said during the ten minute private session be made public.

After Krasniqi finished his testimony, Judge Parker gave him a brief lecture urging him to think upon his return home about the reasons why the Trial Chamber allowed certain witnesses to testify under pseudonym. He assured Krasniqi that when the judges issue orders to protect the identity of the witnesses, they do not take into account the reasons he mentioned in his testimony. The reasons that Krasniqi mentioned will become known when the Tribunal makes public the transcript of the private session during which the witness tried to prove his claims about the Serbian security service “frame-up”.