“REFRESHING THE MEMORY” OF UNWILLING WITNESSES

Did Fatmir Limaj become “Commander Çeliku” in June 1998, or did he refuse the honor because some soldiers laughed at his words that the KLA “must show care to all civilians, regardless of their ethnic background”? 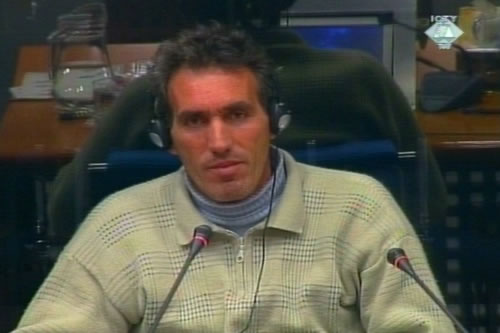 Ruzdi Karpuzi, witness in the Limaj trial
As part of their investigation on the Lapusnik camp, in 2003 the OPT investigators interviewed several former commanders and members of the KLA. All or at least the majority of the interviewees were, in the investigators’ opinion, very “open and cooperative.” The problems cropped up when they were supposed to come to The Hague and to repeat in the courtroom what they had told the investigators in their interviews. The Chamber had to issue sub poenas to some of them, at the request of the prosecution.

One such witness is Ruzhdi Karpuzi, a forty-year-old man from the village of Shal near Lipljan. He joined the KLA in April 1998. Between May and July of that year – in the period relevant for the indictment against Fatmir Limaj, Isak Musliu and Haradin Bala – he fought in the Lapusnik area and was stationed on the farm where the detention camp was located, as the prosecution alleges. Karpuzi, however, claims that he never heard of any camp and never saw any detainees.

In the interviews he gave to the investigators in Kosovo, Karpuzi described, among other things, the oath-taking ceremony in Lapusnik in June 1998 and the address given on that occasion by “Çeliku” – according to the indictment, that was the nom de guerre of the first accused, Fatmir Limaj. In 2003, Karpuzi stated that Çeliku’s speech “demanded respect and we wanted him to become our leader. Çeliku said that – if we showed respect for what he told us – he would become our leader.”

After he read that statement in the courtroom and “refreshed his memory”, the witness tried to convince the prosecutor and the judges that it was no different from what he testified yesterday. Yesterday the witness said (repeating the same things today) that at the oath-taking ceremony Çeliku spoke about the struggle for Kosovo and the defense of the people in which they must “show care to all civilians, regardless of their ethnic background.” Since some soldiers “laughed at that and asked him whether that went for Serbs too,” Karpuzi claims that Çeliku got angry and said that “he would have been our leader if we had showed any respect for his words.” However, since some soldiers laughed at his words, Çeliku “went away and did not become the leader.”

Like the other KLA commanders or members that have testified so far, Karpuzi claimed upon his arrival in The Hague that Fatmir Limaj had not become “Commander Çeliku” before the establishment of brigades and battalions, which happened in August 1998, outside of the timeframe in the Lapusnik indictment, which covers May through July.