IMPRESSIONS AND GENERAL VIEWS OF KRAJISNIK 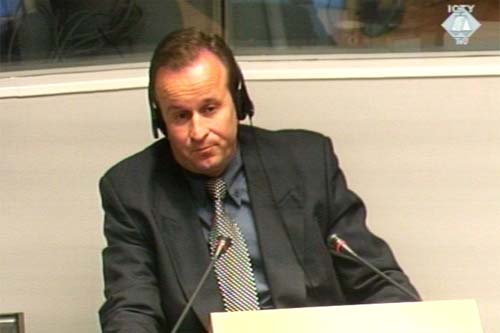 Dragan Djokanovic, witness in the Krajisnik case
The claim that Momcilo Krajisnik was the most influential person in the Serbian Republic of BH, next to Karadzic, simply “is not true”, said Krajisnik’s defense counsel Chrissa Loucas. Witness Dragan Djokanovic, whom she accused of having made this “untrue” statement then commented, “You are paid to defend your client.”

"When you say that Krajisnik was the main person making decisions [in 1992], you are merely presenting your own view, your impression,” Loucas put to the witness. But, Djokanovic, who was Karadzic’s war commissioner for the establishment of the government in the municipalities of the Serbian Republic of Bosnia, stated that “the general view in [that] republic was that Krajisnik was just as influential as Karadzic, if not more.”

The defense counsel also accused Djokanovic that he is “trying to save his own skin” with his testimony: that by claiming that Krajisnik knew about the crimes on the ground he is “trying to relegate his own responsibility”. Djokanovic responded that he had been “part of that leadership and policy”: “I never tried to justify myself. I could and should have done more [about the war crimes].” He added however that he tried to “do what he could within the framework of the RS system," and when he “realized that he had tried all avenues, he left the politics.”

The accused Krajisnik asked permission to put a few questions to the witness at the end of his testimony, claiming the witness was “deluded”. The accused wanted to discuss whether “anyone took any measures if [the witness] had informed anyone of a crime.” Krajisnik’s defense counsel did not want the accused to ask those questions considering them not to be of use for the defense. The judges therefore did not allow Krajisnik to examine Djokanovic, reminding the accused that he was represented by professional lawyers and that he would be permitted to ask questions only in exceptional circumstances.