Among the ten war crime cases prosecuted by the military courts is the case of a captain who ordered his soldiers to “sight their rifles” by shooting an Albanian civilian, testified General Radomir Gojovic today at Milosevic’s trial. What happened with the remains of the victims from Izbica? 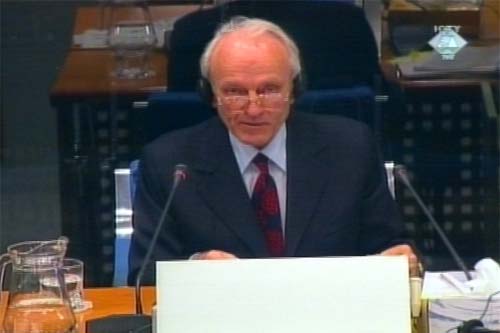 Radomir Gojovic, witness in the Milosevic trial
Slobodan Milosevic does not deny that “there were crimes” committed by Yugoslav Army troops in Kosovo in the spring of 1999, but claims that the documents brought to The Hague by his defense witness, General Radomir Gojovic, “clearly show that efforts were made to bring the perpetrators to justice.”

General Gojovic was the chief of the Legal Directorate in the VJ General Staff at the time covered by the Kosovo indictment. He confirmed that efforts to prosecute were made adding that the military judicial system would have investigated and prosecuted the perpetrators of all crimes, not just the dozen or so cases his papers deal with, but “it did not have enough time” as the VJ and MUP forces pulled out of Kosovo after the arrival of KFOR, and the investigators no longer had access to crime scenes.

Gojovic listed several cases in which proceedings were initiated during the state of war. In one of them, five reservists were charged with having committed “premeditated killing” of seven ethnic Albanians, throwing their bodies into a well, dousing them with gasoline and setting them on fire. In another, a reserve captain 1st class was charged with ordering his soldiers to “shoot an ethnic Albanian” in order to “sight their rifles”. The soldiers proceeded to do so. Proceedings against soldiers accused of raping Albanian girls and women were also mentioned.

Among the cases against “persons unknown”, Milosevic and his witness focused on the Izbica case, where, as alleged in the indictment against Milosevic, members of the military and the police shot to death at last 120 Albanian civilians on 28 March 1999. During the prosecution case, the court heard testimony of several Kosovo Albanians who survived the execution and the doctor who filmed the bodies of the victims and organized their burial in individual graves three days after the massacre. After NATO published aerial photographs of the area, with two rows of freshly-dug graves visible, the Serbian forces – the indictment alleges – dug the graves up and removed the remains of the victims.

General Gojovic confirmed today that the graves in Izbica had been exhumed in late May or early June 1999 and that the VMA pathologists in Belgrade had autopsied the victims. He did not say, however, what had been done with the bodies. According to the evidence presented by the prosecution at this trial, some of the bodies from Izbica were found in a mass grave near Kosovska Mitrovica, while a blanket in which one of the Izbica victims had been wrapped was found in a mass grave in Batajnica near Belgrade.

In the cross-examination of General Gojovic which will continue next Tuesday, the prosecutor will probably ask the witness what happened with the remains of the bodies from Izbica after the autopsies.