PERISIC’S CONTRIBUTION TO CRIMES IN CROATIA AND BOSNIA

Logistic and personnel support provided to the Republika Srpska Army and the Serbian Army of Krajina by general Momcilo Perisic, in his capacity as the Yugoslav Army Chief of General Staff, contributed to a considerable extent to the commission of crimes in Sarajevo, Zagreb and Srebrenica, it is alleged in the indictment unsealed today. 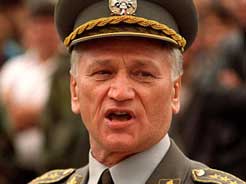 Momcilo Perisic
The indictment against former Yugoslav Army (VJ) Chief of General Staff Momcilo Perisic charges him in 13 counts with the shelling of Sarajevo and Zagreb and the crimes committed in Srebrenica in July 1995. The indictment was unsealed today after the accused arrived in the UN Detention Unit. The logistic and personnel support provided by General Perisic, as the top man in VJ, to the Republika Srpska Army (VRS) and the Serbian Army of Krajina (SVK) contributed to a considerable extent to the commission of those crimes, as the indictment alleges.

Momcilo Perisic is charged with those crimes on the basis of both individual criminal responsibility – for aiding and abetting their planning, preparation and commission – and command responsibility – because he knew the VRS and SVK commanders were committing those crimes, yet failed to prevent or punish them.

The indictment against Momcilo Perisic covers the period between 26 August 1993, when he became the VJ Chief of General Staff, and the end of the war in BH in 1995. The indictment alleges that in that capacity General Perisic was responsible for issuing orders, controlling and disciplining VJ military personnel and units, both in the territory of the FRY and outside of its borders. According to the indictment, the personnel included many VJ officers who had been seconded to the SVK or VRS, the officer corps in those two armies that remained on the VJ payroll throughout the war and regular VJ troops that were deployed outside of the borders of the FRY or took part in activities in Yugoslavia in support of the VRS and SVK. The indictment goes on to allege that General Perisic personally established the 30th and 40th Personnel Centres within the VJ General Staff in order to disguise the source of financing of those officers.

As the Chief of General Staff of the VJ, Perisic promoted or recommended for promotion VJ officers serving in the VRS and SVK. The list of officers promoted by the Supreme Defense Council on the basis of Perisic’s proposals and suggestions includes General Ratko Mladic, the two commanders of the Sarajevo-Romanija Corps accused of the shelling of Sarajevo, as well as General Radislav Krstic, Colonel Vinko Pandurevic and Lieutenant Colonel Dragan Obrenovic, who received extraordinary promotions in December 1995 – less than a year after the massacre in Srebrenica for which they have been indicted by the ICTY.

Apart from personnel support, General Perisic as Chief of Staff provided substantial support in weapons, ammunition and logistics, that the VRS and SVK used – as alleged in the indictment – in part to shell Sarajevo Zagreb and to deport civilians from Srebrenica and kill more than 7,000 men captured there.

The list of members of the 30th Personnel Centre – people who, according to the indictment, planned, instigated and committed the crimes in Srebrenica - is practically identical with the ICTY list of persons accused of that crimes: generals Mladic and Krstic, colonels Beara, Popovic, Blagojevic, Pandurevic, Lieutenant Colonel Obrenovic, Major Jokic and others. All of them – including generals Tolimir, Gvero and Miletic, who have recently been indicted by the ICTY – were on VJ payroll throughout the war.

The indictment against Perisic reveals some new details about the role the VJ played in the Srebrenica operation conducted by the VRS. It alleges that officers from the VJ Uzice Corps participated in the planning and preparation of the attack on the safe area; that on 13 July 1995, Perisic issued an order to thirty VJ officers to report to the VRS Main Staff for assignments in BH, including the Srebrenica area; that the VJ organized covert training of the personnel of the 10th Sabotage Detachment in December 1994 in Yugoslavia and in March and April 1995 in Republika Srpska. Members of that detachment participated in a number of executions in Srebrenica in July 1995. Perisic is also said to have ordered the closing of the border between Serbia and Bosnia, in order to prevent the Srebrenica Muslims from fleeing to Serbia and to bring those who had managed to cross the Drina river back to Bosnia.

In the indictment, Momcilo Perisic is charged with murders, cruel treatment, attacks on civilians, persecution on political, religious and racial grounds and extermination. Those offences are qualified as crimes against humanity and violations of laws and customs of war.