Four persons accused of crimes in the Omarska, Keraterm and Trnopolje camps in Prijedor had their sentences confirmed by the Appeals Chamber. The sentences range from five to twenty five years in prison 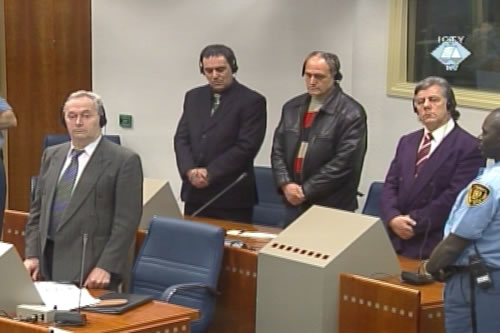 Dragoljub Prcac, Zoran Zigic, Miroslav Kvocka and Mladjo Radic in the courtroom
The Appeals Chamber of the Tribunal confirmed today the judgment passed by the Trial Chamber in November 2001, finding Dragoljub Prcac, Miroslav Kvocka, Mladjo Radic and Zoran Zigic guilty of the crimes committed in the Omarska, Keraterm and Trnopolje camps in Prijedor in the summer of 1992. Kvocka was sentenced to 7, Radic to 20, Zigic to 25 and Prcac to 5 years in prison. The Chamber did grant several grounds of appeal put forward by Kvocka and Zigic, but this did not affect the severity of the punishment imposed on them in the first-instance judgment.

The judgment of the Appeals Chamber puts an end to the proceedings for the crimes in the Omarska, Keraterm and Trnopolje camps. The events in those camps were touched upon at the trial of Momcilo Krajisnik and they will be mentioned at the trials of Ratko Mladic, Radovan Karadzic and Stojan Zupljanin, when and if they ever arrive in The Hague.

The first sentence ever passed by the ICTY and its most severe sentence were both passed at trials for the crimes committed in the Prijedor camps. In its first judgment, in May 1997, Dusko Tadic was sentenced to 25 years in prison. The sentence was reduced on appeal to 20 years. Omarska, Keraterm and Trnopolje were a major item in the indictment against Milomir Stakic, former president of the municipality and the Crisis Staff in Prijedor. He is the only person to have been sentenced to the most sever punishment envisaged by the ICTY Statute – life imprisonment – by a first-instance chamber. His case is currently under appeal.

Apart from the four persons whose sentences were confirmed today, the Trial Chamber in this case sentenced Milojica Kos to six years in prison. Kos first filed an appeal and then withdrew it. After serving two thirds of his sentence, he was released in July 2002.